Why is one of Sutton’s oldest trees being chopped down? 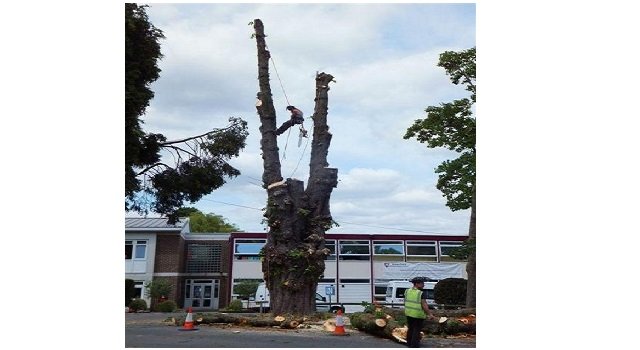 Fuming neighbours have poured scorn on the council for hacking down one of Sutton’s oldest trees.

The Horse Chestnut in Western Road is thought to be hundreds of years old,  but tree surgeons arrived earlier today and started pulling it down.

Despairing neighbours looked on in horror as huge branches were ripped off the tree and fell in the road.

The towering Horse Chestnut used to stand in front of Homefield Preparatory School.

People in the area were concerned the school had asked for the tree to be destroyed.

The Horse Chestnut is thought to be hundreds of years old

Bob Last, 81, has lived on Tate Road opposite the tree for 57 years, he said: “My daughter is devastated, my wife is distraught.

“I have been here nearly 60 years and I have always admired that tree.

“I think it is hundreds of years old, why would they cut down such a wonderful thing?

“It makes no sense. The council will not even tell me why. It is awful.”

People living in Western Road and the adjacent Tate Road say they received nothing telling them the tree was being cut down.

Patricia Le Serve, 72, who has lived in the area 50 years, said: “When I saw the people there I thought they were just giving it a haircut.

“They are pulling it down and that is simply dreadful.

“It is such an old tree, it should have a conservation order or something.

“It should be protected so they can not cut it down.

“It is disgusting, I am so upset.”

Ben Morris, senior arboricultural and woodlands officer at Sutton Council, said: “Following a routine inspection of all the street trees in the Sutton West ward, this particular tree was identified as being infected by the decay pathogen Ganoderma.

“This type of decay affects the main structural roots and the lower stem of a tree.

“Once the fruiting bodies are evident, there is a high potential for the tree to fail.

“Other indicators confirmed the tree to be in a poor state of health, given the high usage of the site, there was no question that the tree could be retained safely.

“We hope to replace this with a new tree this coming autumn or winter.”

Locals have reported most of the tree has now been pulled down, but workers will return to finish the job tomorrow.