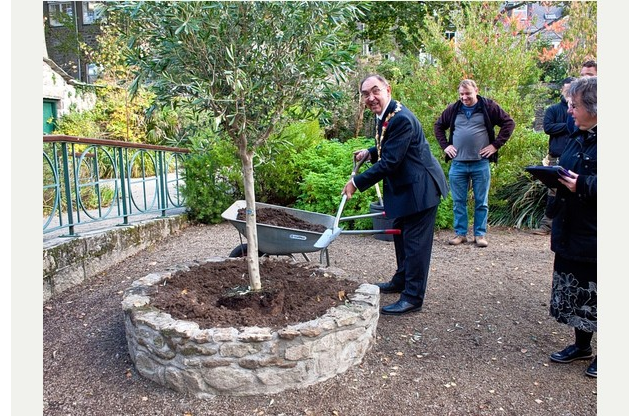 TWO olive trees have been planted in Penzance to commemorate 100 years since the Great War and to remember the 380 men from the town who gave their lives fighting for their country.

The two trees were planted in the Memorial Garden in Penlee Park by Penzance mayor David Nebesnuick with the Reverends Sian Yates and Julyan Drew saying prayers and giving readings.

“It is hoped that in another 100 years our descendants will be in this quiet place reflecting on what happened today and reflecting on the 200th anniversary and on this spot will be these two trees still growing strongly as a testament to our commitment to peace and remembrance.”

The annual Penzance Remembrance Sunday Service will this year be held at the War Memorial at Battery Rocks on Sunday.

The service, which has been organised by the Penzance Royal British Legion with assistance from the town council, will start at 10.45am.

It will be attended by the town mayor, Councillor David Nebesnuick, former Penzance mayors and freemen and local youth groups as well as service organisations.

Next Tuesday, November 11, there will be a two minute silence for Remembrance in the Memorial Garden, Penlee Park at 11am.

In Hayle, a service will be held at 9.30am at St Elwyn’s Church on Sunday.

The parade will march off at 10.40am from St Elwyn’s Church to the War Memorial. On the same day, the Rotary Club hosts a Remembrance Day concert in aid of Hayle and St Ives Poppy Appeal at St Anta Church, Carbis Bay at 7.30pm.

At St Just, the parade musters at the RBL club on Sunday ready to move off to St Just Parish Church at 10.40am.

On completion of the service, the Parade will move to War Memorial for the laying of wreaths.

At St Ives, the parade assembles at The Guildhall at 10.40am prior to proceeding to the War Memorial for the two minutes silence and laying of wreaths.

The parade will then go to the Parish Church for the Remembrance Day service.

In Marazion, the parade with leave the town hall for the two minutes silence and laying of wreaths at the War Memorial at 10.55am.

Afterwards there is a service at Marazion Methodist Chapel as the parish church is undergoing some refurbishment.