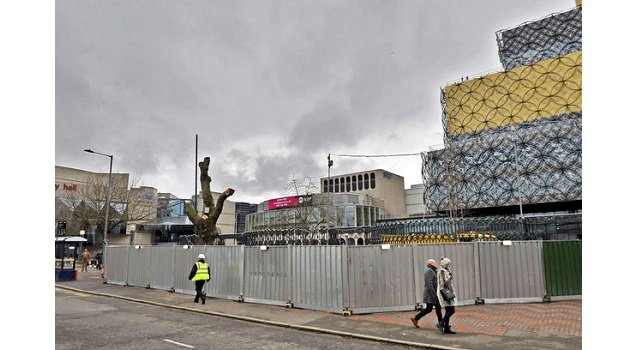 A London plane, believed to be the oldest tree in Birmingham, has been felled despite a huge campaign to try and save it.

The tree on Broad Street, which is at least 90 years old, had been reduced to a stump on Saturday.

The tree has been removed to make way for new anti-terror barriers that will be put up along the street.

Workmen with climbing gear and a chainsaw removed the final sections of the trunk behind metal screens.

Furious campaigners had launched a petition as they tried to save the tree, which stood on the edge of Centenary Square near the Library of Birmingham.

The way is also being cleared as part of works on the Metro tram line extension and an upgrade to the square.

Michael Allen, 46, was watching the removal operation on Saturday after his pleas to the council failed to tip the balance.

The lorry driver, from Castle Bromwich, said: “The tree was perfectly healthy and it was a nice historical feature but they say it needs to be removed to make progress. I think it’s just more convenient to take it out rather than work round it and at least give it a chance.

The tree was first reckoned to be the last of 99 planted on Broad Street during the great transformation of the city centre in 1876 under Mayor Joseph Chamberlain.

But it is now thought to be a replacement for those original trees.

Birmingham City Council and Transport for West Midlands said: “We have looked long and hard at all the options to retain this particular tree but because the Metro extension and the Centenary Square development, with its in-built anti-terror measures, have been designed as one integrated scheme it has sadly not been possible.

“While it is unfortunate we will have to lose this London plane tree, we will be planting 59 semi-mature trees as part of the new square design, making the area even greener than before.”