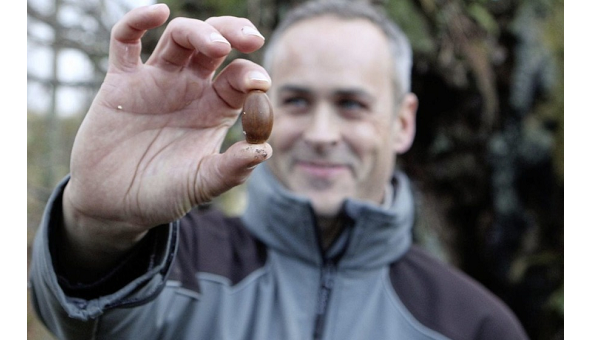 A historic Belfast oak tree believed to be the oldest in Ireland, is producing acorns again.

The oak, believed to be more than 400 years old and located in Belvoir Forest Park, has produced six acorns, which are to be planted by school children next week.

“It barely has enough branches or twigs to produce acorns so it’s amazing to think it is alive enough to produce a crop of them,” Mr Clarke said.

“We’ve got six off this and we don’t know when it will produce again. We’re very happy to get these. They dramatically reduce the amount they produce acorns as they get older,” he said.

The oldest oak tree recorded within Belvoir forest dates back to 1642, but the largest tree in the forest, known as ‘granddad’, which has produced these acorns, is considerably older, but due to its condition its origins can not be accurately determined. The giant tree is just under 9m in girth.

The acorns recovered are to be potted up on Monday, as part as part of a conservation project involving pupils from Belvoir Primary School.

“It is a great thought that local people will be involved in ensuring the future of the forest by planting seeds of local provenance that will be suitable to the environment. Acorn production dramatically decreases with age and so we must make the most of each opportunity,” Mr Clarke added.

The aim is that the planted acorns will be suitable for planting back in the forest in around three years’ time.