Oldest Euronpean tree found to be having growth spurt 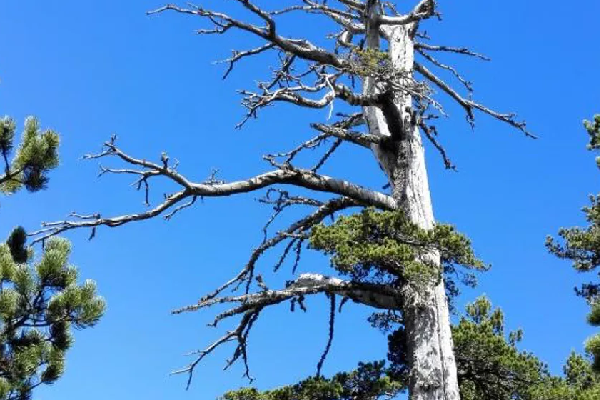 Moreover, the ancient pine seems to be living it up in its old age, researchers reported last week in the journal Ecology. Examinations show that the tree had a growth spurt in recent decades, where larger rings were added to its trunk even though many trees in the Mediterranean region have been experiencing a decline in growth.

The discovery shows that some trees can survive for centuries even when subjected to extreme changes in climate. This ancient pine, for example, would have germinated in a cold period during Medieval times and then lived through much warmer temperatures, including periods of drought.

Analysing its growth through so many years of shifting conditions can help scientists better understand how forests at large might respond to modern climate change, the study team says.

Gianluca Piovesan from the University of Tuscia and his colleagues came across the elderly Heldreich’s pine on a steep, rocky slope high in the mountains of Pollino National Park. While the tree looked very old, the team soon realized that determining its true age wouldn’t be as simple as dating its rings. The central part of the tree, which would have contained the most ancient rings, was missing.

“The inner part of the wood was like dust—we never saw anything like it,” says team member Alfredo Di Filippo. “There were at least 20 centimeters of wood missing, which represents a lot of years.”

The tree’s roots were in better shape, so the team decided to see if they could uncover its age using a novel method that combines a few existing techniques.

Although both the trunk and roots of a tree produce annual rings, they can develop at different rates so it’s not straightforward to correlate their growth. However, radiocarbon dating samples of its exposed roots allowed the researchers to determine when the tree germinated. The team was then able to cross-date ring growth in root and trunk samples to reveal the years missing from the trunk.

“By joining these two methods, we were able to establish the time frame much more precisely,” says Piovesan.

“The tree’s age is impressive, considering the dense human population that’s formed in the region over the past millennia,” says Oliver Konter from the University of Mainz in Germany, who found a 1,075-year-old pine tree in northern Greece that was previously the oldest known in Europe.

Forested areas have been heavily exploited by humans in this time frame, as land has been transformed for agriculture and cities have grown. However, remote areas such as the home of the ancient pines were spared, since the harsh landscape would have been hard to access. Although the park is home to thousands of Heldreich’s pines, most are between 500 and 600 years old. The team spotted just three others that are likely to be more than a millennium old.

The team notes that recent global warming also hasn’t been a setback for the ancient trees. Although parts of deciduous forests in the region have died due to arid conditions and heat waves, Piovesan and his colleagues found that the oldest pine has thrived. Their tree ring analysis showed that after laying down smaller rings for a few centuries, wider rings have grown in the past two decades, which indicates better environmental conditions.

The reasons for the favorable growth are likely to be complex. In part, the high mountains have their own microclimate, where temperatures remain cooler. Piovesan and his team also think that a decrease in pollution due to recent European laws and rewilding efforts have played a role.

“It’s difficult, because there are few studies about the impact of warm periods on Mediterranean boreal ecosystems,” says Piovesan.

Furthermore, the unique biology of trees may be helping the old pine survive. In contrast to animals, ageing isn’t programmed into trees, so they are effectively immortal.

Sequoias and redwoods that grow in undisturbed landscapes in the U.S., for example, can sometimes be thousands of years old. Conifers, which are slow-growing, are known to live the longest, partly because they remain smaller for longer parts of their lives, making them less vulnerable to extreme events like droughts and storms.

In addition, old trees may be considered to be alive when only small parts of them are actually living. In the case of the ancient pine, most of its crown has died, but it could potentially continue living in this state for centuries more.