The oldest trees in Africa are dying, and scientists are stumped 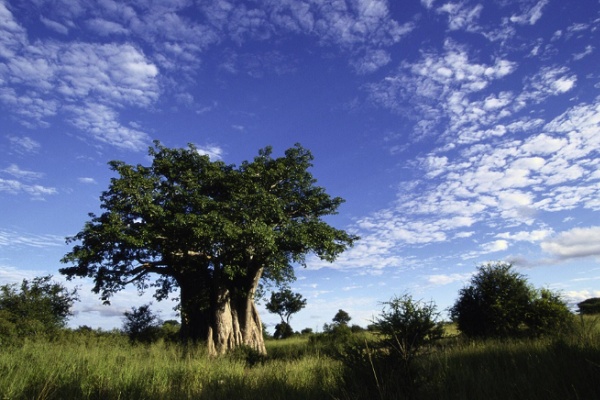 In South Africa, the Limpopo province, a baobab tree once grew so large and stood so strong that its human neighbors decided to do the obvious: They built a pub inside the living tree’s thousand-year-old hollow trunk, which measured more than 150 feet around and enclosed two interconnected cavities.

For two decades, the Sunland baobab attracted tourists wanting to knock back a pint in a tree. But in August 2016, one of the monster stems forming the interior wall cracked and collapsed. Eight months later, another huge chunk toppled over, and now, five of the giant Sunland stems have collapsed and died, leaving only half of the tree standing.

Though the Sunland tree’s demise could sound like a consequence of human visitation, it’s part of an alarming trend: A startlingly high percentage of the oldest, largest baobabs in Africa have died within the last 12 years, scientists report today in the journal Nature Plants.

That means the Sunland tree’s fate could be a harbinger of a future without these whimsical, beloved trees. The culprit behind their deaths is still unknown, though scientists suspect that changing climate is to blame. (By contrast, the oldest tree in Europe is now having a growth spurt.)

“It is very surprising to visit monumental baobabs, with ages greater than a thousand to two thousand years, which seem to be in a good state of health, and to find them after several years fallen to the ground and dead,” says study coauthor Adrian Patrut of Romania’s Babes-Bolyai University.

“Statistically, it is practically impossible that such a high number of large old baobabs die in such a short time frame due to natural causes.”

Looking like creatures from a Dr. Seuss illustration, baobabs are characterized by their thick trunks and sparse branches, which sometimes make the trees appear as though they’ve been planted upside-down. Because of the way they grow—by adding stems in a ring-shaped structure—baobabs are famous for having hollow interiors that can sometimes be big enough to entertain (or imprison) people inside. (Meet the people replanting trees by hand in Canada.)

The oldest seed-producing trees in the world, the nine species of trees in the Adansonia genus have earned themselves a cornucopia of colloquial names and roles in folklore and legend, and they are valuable players in dry deciduous forests, deserts, and savannas from Africa to Arabia to Australia.

Patrut began studying baobabs in the early 2000s, and he has spent much of the last 15 years identifying more than 60 of the largest, oldest specimens and using radiocarbon dating to determine the trees’ ages. Unlike trees such as redwoods and oaks, baobabs can’t simply be aged by counting their growth rings; as the trees grow, their rings fade or are erased, and their giant interior cavities make the remaining traces difficult to count.

Patrut has largely focused on the African baobab, Adansonia digitata, scattered mostly throughout continental Africa and the surrounding islands.

The majority of the largest and oldest African baobabs grow in southern Africa, he says. But since 2005, eight of the 13 oldest trees and five of the six largest have either suffered catastrophic partial collapses or completely fallen down and died. These include well-known trees that have become famous for their size or natural architecture like the Sunland baobab, as well as the sacred Panke baobab, a giant tree in Namibia called Grootboom, and Botswana’s Chapman baobab.

Though it’s a small data set, the trend is alarming. “We felt as if we were the ones outliving the baobabs, instead of them outliving many generations of humans,” Patrut says.

National Geographic explorer Henry Ndangalasi, a botanist at the University of Dar Es Salaam in Tanzania, agrees that the discovery is eye-opening: “I think we take for granted that these giant trees have no problem,” he says.

Patrut and colleagues do not think the trees’ deaths are the work of disease, and instead suggest the wave of mortality may be the result of a hotter, drier climate. In addition to these superlative trees, the team notes that other mature baobabs are dying at an accelerated rate, particularly in areas where the African climate is warming most rapidly.

Though more work needs to be done to definitively connect the dots between climate change and baobab mortality, a different study, published in Biological Conservation, has already concluded that changing climates will harm two of the three endangered baobab species in Madagascar.

There, increasing temperatures and more extreme variations in seasonal rainfall will restrict the ranges in which these trees can grow—and the Malagasy government has not yet set aside protected areas that could be suitable in the future.

“The findings of the study with baobabs is not surprising, unfortunately,” she says. “There is an unexpected high mortality in the oldest baobabs in the south of Africa, but we do not know why.”

Toledo Aceves also points out that the number of studied baobabs is low and says it’s possible—although unlikely—that the findings are just reflecting a natural pattern of mortality in older individuals.

“These trees can live for more than two thousand years, and while the researchers are following exactly the older individuals, I think it is remarkable that more than 70 percent of them died in such a short period of time,” she says.

In other words, too many trees are dying too rapidly for the trend to be natural.

“From 2005 to 2017 is about 12 years, and considering the long life span of these trees, it is rather unlikely that is a natural pattern.”