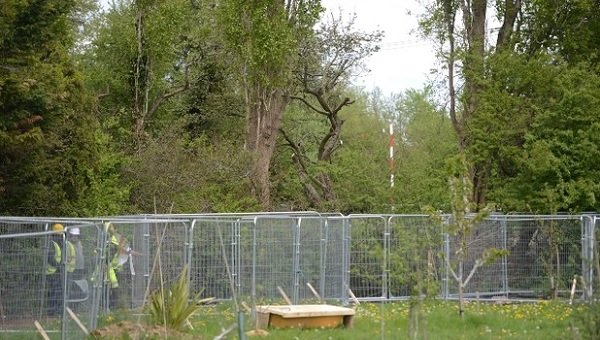 Bristol City Council workers this week began cutting down the huge trees on the site of Stapleton Allotments.

Protesters set up camp in some of the trees on the site for six weeks in an attempt to overturn a decision to fell the trees to make way for a new bus route.

As the protest progressed, some of the protesters made their way into the old oak trees on site, and had to be removed by bailiffs in March.

In a four-day operation, protesters were carried and escorted off the site after chaining themselves to both the natural environment and diggers.

The eviction involved hundreds of bailiffs and cost Bristol City Council hundreds of thousands of pounds.

The site, which is just off the M32, has now been secured by the council and work is under way to clear the trees and allotments.

Once work on the allotments is complete, construction on the planned Metrobus route is due to start later this year.

A spokeswoman for Rising Up, the protest group who occupied the allotments, branded the tree felling “heartbreaking” and said the council should be ashamed.

She said: “The mighty oak Rising Up defended was felled. Shame on you.”

Yesterday the trunks of the huge trees could be seen lying on the grass as experts brought them down.

Fences cordoned the entire site off from public access.

A new £200m bus-only junction is being built to allow Metrobus vehicles to travel up and down the area.

Once work is complete, more than 1,700 trees will be planted by the MetroBus project in the M32 area, including 100 semi-mature specimen trees.

In total 17,500 hedgerow plants, shrubs and trees will be planted near to the junction.

Supporters of the project say the bus-only junction will result in dramatic time savings for services heading from the city centre to the University of the West of England.

The allotments which are being lost will be replaced in a new location, and improved facilities will be put in place for allotment holders including more parking, more water points and a new allotment building.

But the Rising Up group claim that vital green space is being destroyed, including habitats for several different species and high-quality soil.