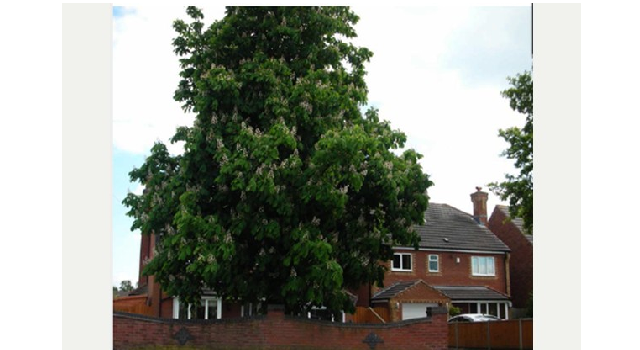 A Nuneaton resident has been told she cannot remove a ‘monstrous’ tree from in front of her home.

Dr Boyal-Seth pleaded with members of Nuneaton and Bedworth Borough Council’s planning committee to grant her permission to remove a huge horse chestnut tree from the garden of her house, in Golf Drive.

She applied for permission after the tree,which is protected by a tree preservation order,caused damage to her garden wall and driveway.

However the application was recommended for refusal due to the tree’s ‘significant visual amenity’ and the fact it had not damaged the house.

But councillors were also told that if the tree was to cause any further damage in the next 12 months, the council could be liable.

Dr Boyal-Seth spoke at the local authority’s latest planning meeting and told committee members that although she herself loves trees, the horse chestnut has doubled in size since she bought the house and it has caused cracks in her garden wall and driveway.

She said: “I’ve been monitoring the cracks and can confirm they are getting worse.”

She added: “The tree has grown to a monstrous size.”

Dr Boyal-Seth also told councillors that she previously applied to cut the tree back by 50 per cent, but the authority only allowed her to cut it back 10 per cent which was not enough.

Ward councillor Kris Wilson also spoke at the meeting to object to the proposals.

He said: “There are a number of trees that line golf drive and we have an opportunity here to keep a tree.”

He added that it is a tree of many decades standing and has a high amenity value.

“I would ask this committee to endorse the recommendations of the tree officer,” said Cllr Wilson.

Committee members had mixed opinions, with some councillors saying that the tree preservation order should be respected and others empathising with the resident.

Councillor Dennis Harvey kicked-off the debate and said that the tree was there well before the house and should be protected.

He said: “For the first time in my life I agree entirely with councillor Wilson.”

He then moved that the application be refused.

Councillor Don Navarro was also in support of refusal but suggested that steps could be taken to prevent further structural damage such as having a gravel driveway.

“The recommendation by the officer is endorsed by myself,” he added.

But other committee members were opposed to the recommendation.

Councillor Barry Longden said: “I will not be supporting the recommendation. This is a monstrosity outside somebody’s house.”

He added: “I will not support the recommendation. I think it would be a gross miscarriage of justice.”

Councillor Tony Lloyd argued that nobody on the committee would want the tree in front of their own home.

He said: “Sometimes on planning we have to look at things in a common sense way. I would imagine that when the house was bought the tree was nowhere near that size.”

“I still don’t believe that people sitting in here would want that sitting in their drive,” he added.

The application to remove the tree was refused with a vote of seven to four with one abstention.