Now you see it! Historic Wellingtonia is felled 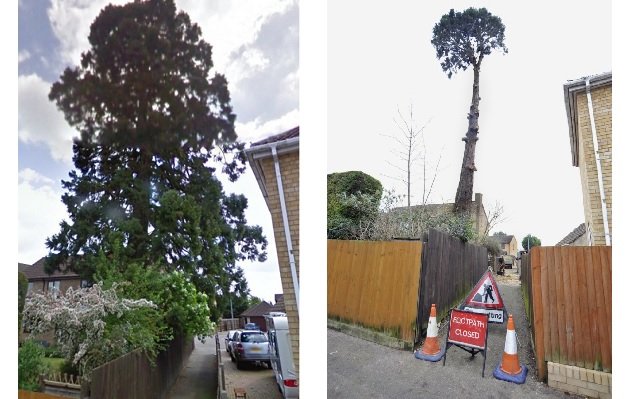 Tree surgeons moved in to tackle a Wellingtonia in the garden of a home in Red House Gardens, last Wednesday.

The tree was estimated to be up to 120 years old and towered to almost 100 feet – almost as tall as the statue of Christ the Redeemer, in Rio de Janeiro.

The tree, which was subject to a tree preservation order, lost a large branch last year due to a defect likely to have been caused by strong winds over the years.

With evidence that some remaining branches within the crown of the tree also have cracks, East Cambridgeshire District Council agreed with the owners to fell the tree for safety reasons.

Footpaths were closed during the work, which took almost a week to complete.

The Wellingtonia was named after the Duke of Wellington and is not native to the UK. According to the Royal Botanical Gardens, it arrived in the country from America in 1853 and is related to the giant redwood, which is capable of reaching 90m in height.

For more information on this or any tree related enquiry, call East Cambridgeshire District Council on 01353 665555.