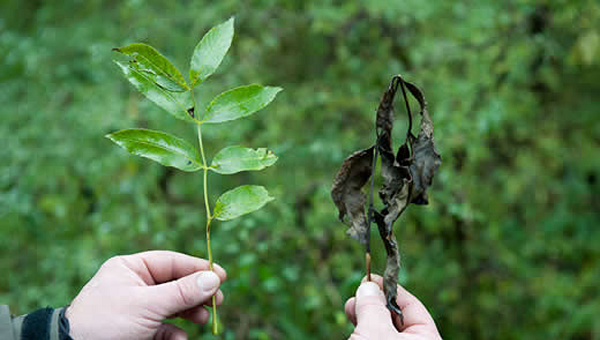 Nottinghamshire residents are being alerted to health and safety problems as a tree disease spreads rapidly around the county, chad.co.uk reports.

The county council said the ‘devastating effects’ of the Ash Dieback disease is something people need to be aware of.

The disease, which causes trees to die and collapse, may pose a safety risk if branches suddenly fall on to roads and footpaths.

And there have already been outbreaks identified along several main roads in the county – including the A610, A614, A617 and A612.

Dave Simpkin, forestry manager at Nottinghamshire County Council, and his team of experts are dealing with the rapidly-spreading disease, which was first spotted in the county two years ago.

He said that being in the centre of the country means Nottinghamshire has been “invaded from all angles” by the disease.

He said: “The latest outbreak map shows that the disease has invaded Nottinghamshire, slowly but surely, one map grid at a time.”

Other than two small areas near Worksop and Newark, the whole county is now affected.

“Once identified we have two years to act before the trees become vulnerable,” Dave added.

The council has an annual budget of £500,000 to deal with the disease and work on cutting back the trees.

There are currently 167,000 trees in Nottinghamshire within the highway boundary, or on private land next to the highway.

Main roads, dual carriageways and affected trees near schools are being prioritised and private landowners are being advised where there is a danger.

The disease can be spotted in late summer when the forestry team is able to identify locations where there are potential outbreaks.

During winter, they concentrate on clearing affected trees from alongside the road network for safety reasons.

Dave said: “We leave trees as long as can be but you have to be sensible as the pattern is that they will stand, die, and then collapse.

“For safety reasons we have determined that we will clear any affected Ash trees up to a distance of seven metres in from the carriageway.

“Depending on how the trees have been planted will dictate what the end result will look like but it’s fair to say it probably won’t be attractive.

“Trees are planted in blocks or lines or sometimes in a mix with other trees.

“However, even there, if the Ash have grown faster and crowded out the other trees, you will end up with a threadbare look.”

The younger trees succumb to the disease first, while the bigger trees will last a bit longer.

“The most noticeable impact will come with the felling of thousands of telegraph pole-sized trees,” said Dave.

The first confirmed case of Ash Dieback in the county was identified nearly two years ago, along the A612 Colwick Loop Road.

To read the full story, please visit the Chad website by clicking here