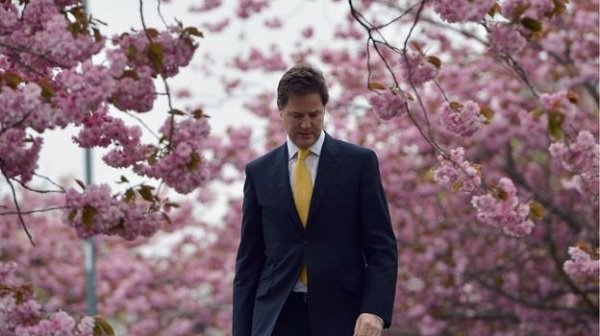 Former Lib Dem leader Nick Clegg has called the destruction of thousands of trees across the city where he is an MP a “national scandal”.

Opponents of the Streets Ahead project were granted an interim injunction by the High Court on Friday and the council was ordered to halt felling.

In an email to council leader Julie Dore, Mr Clegg said it was wrong to chop down “hundreds of healthy trees”.

Ms Dore defended the programme and said it was about “protection, not destruction”.

The Labour-run council launched the scheme to remove dead and dangerous trees from the roadside.

It planned to remove and replace about 5,000 trees in total and has so far replanted 3,618 trees.

But Sheffield Hallam MP Mr Clegg called on the council to abandon “the unjustified and unpopular” programme, which has been fought in the courts by the Sheffield Tree Action Group (Stag).

“I would urge you – once again – to admit that your council has got this wrong”, he wrote.

Ms Dore said plans to replace trees were given the green light in 2009 when Liberal Democrat councillors were in control of the council.

A survey conducted under their tenure found 75% of the city’s trees – some of which were 150 years old – were at a risk of a “catastrophic decline” in their health.

“It gave us a once-in-a-lifetime opportunity to safeguard the streets of Sheffield and [the Liberal Democrats] were complicit in that,” said Ms Dore.