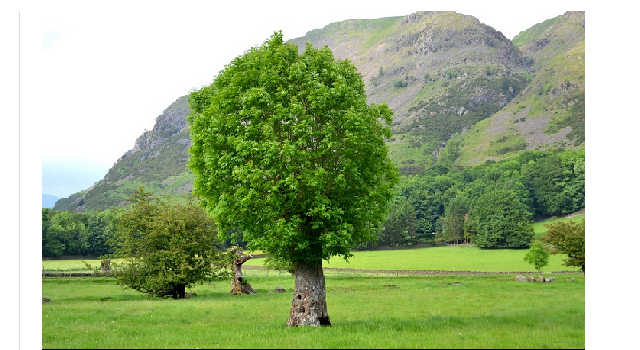 An international forestry expert has warned that more than half a million ash trees in Cumbria – some dating back to the Tudors – are directly threatened after new cases of ‘Chalara Ash Dieback Disease’ were confirmed in the Lake District.

Professor Ted Wilson, Director of the Penrith-based Silviculture Research International, said reports of the disease in ash trees in Cumbria was the “news we have all been dreading.”

The latest information released by the Forestry Commission shows confirmed reports in the Borrowdale area, the Kendal to Windermere corridor, the south-east lakes area, the Eden Valley and near Carlisle and Longtown.

“In 2014 a large area of infection was identified in north Lancashire so we feared it would only be a matter of time before Cumbria saw new cases,” he said.

Ash Dieback could turn out to be as environmentally damaging as Dutch Elm Disease which wiped out millions of trees in the UK in the 80s and 90s. Professor Wilson called for tougher import regulations and plant health checks at border points.

“These latest cases pretty much confirm Ash Dieback is here and spreading in the heart of the county,” added Professor Wilson.
Professor Wilson, who teaches forestry at the University of Toronto and throughout the world, formed the first local ash action group in 2012 when the first Cumbrian incidence of the disease was discovered near Aspatria.

Whilst the Forestry Commission has reported that the latest affected trees are young and only subtly affected by Dieback – suggesting contamination in 2014 – Professor Wilson said there was no room for complacency.

“Cumbria has over 500,000 mature ash trees in the landscape, outside woodlands, along hedgerows, field margins and across the fells,” he said.

“It is the most common and most important species outside woodlands in the county and many of these are hundreds of years old and an integral part of the Lakeland scenery.

“Some worked trees, pollards, are part of the farming system first introduced along with Herdwick sheep in Viking times, over 1000 years ago.

“The loss of these trees is a direct threat to the landscape of Cumbria and the Lake District National Park and some iconic specimens date back to Tudor times and perhaps even earlier.”

Young ash trees are most susceptible to Dieback – which causes leaves to curl up before killing the entire plant – but eventually even mature trees succumb.

Professor Wilson urged members of the public, landowners, conservation groups and local authorities to act together to help reduce the spread of Ash Dieback.

“Everyone can help by reporting sightings of the disease on the Forestry Commission’s TREE ALERT website,http://www.forestry.gov.uk/treealert,” he urged.

There are also opportunities for people to get involved in Citizen Science projects and more information is available on the Forestry Commission website.

But Ash Dieback is just the tip of the iceberg when it comes to the modern-day threats to trees, he added.

“Many other native species are being affected by introduced pests and diseases, juniper, Scots pine, even oak,” he said.

“We need to educate ourselves to identify tree diseases, act quickly to reduce the rate of spread or minimise economic losses, and find new ways of stopping pests and diseases coming into Britain.

“There has been an increase in support for tree disease research, but we need to do a lot more.

“I was recently in Canada studying Emerald Ash Borer and Asian Long Horned  Beetle. These are two of the most important threats to our forests in Britain. Both beetles will kill many trees very quickly if they arrive and get established here.”

The Forestry Commission and other organisations are sponsoring research into genetic resistance to the ash dieback fungus.

“We think a few percent of trees are able to withstand infection without serious injury or death. We hope these will form the core for breeding new resistant populations. But it is very early days, trees take a long time to grow, and we have a lot still to learn,” said Professor Wilson.

“Ash will probably remain in the landscape, but ultimately at a reduced level and perhaps there will be fewer of the big old specimens that are such a feature of Cumbria.

“We need to start looking for alternative species, diversify the types of trees we use in the future.

“Ash was the species that replaced elm trees as the hedgerow tree of choice across the whole British landscape.

“So the news of the rate and speed of spread of Ash Dieback is a huge concern to everyone, and will almost certainly have an impact on how the countryside appears.

“In Suffolk and Norfolk where the disease was first found, the scale of the damage is now becoming obvious and it is all terribly sad. In some woodlands almost every tree is either dead or showing signs of significant infection.

“We need tougher import regulations and plant health checks at border points and co-operation at all levels of government and industry, to minimise the risk of introducing more diseases like Chalara Ash Dieback. Through research, teamwork and international collaboration, there is hope that we can reduce the risks for other tree species.”