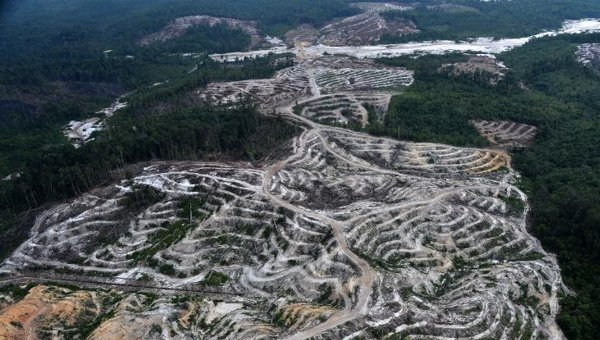 Satellite images have found that ancient forests in Indonesia, a cradle of biodiversity and a buffer against climate change, have shrunk much faster than thought, scientists said on Sunday.

Primary or ancient forests are distinguished from managed forests, which are plantations of trees grown for timber and pulp.

The researchers found that primary forest loss accelerated during the period under review, reaching an annual 840,000 hectares by 2012 — nearly twice the deforestation rate of Brazil, which was 460,000 hectares in the same year.

Deforestation is also a blow to the fight against climate change, as ancient trees store more carbon emissions from the atmosphere than new ones do, and for a longer period, thus mitigating global warming.

The research, led by geographer Belinda Margono of the University of Maryland, looked at long-term satellite images.

During 2000-2012, total forest cover in Indonesia retreated by 15.79 million hectares, of which 6.02 million, or 38 percent, was primary forest, the investigation found.

Distinguishing between primary and managed forest is vital in the campaign to preserve biodiversity and combat climate change, the paper said.

“It is critically important to know the context of forest disturbance, whether of a high-biomass natural forest or a short-cycle plantation,” it said.

“Similarly, the clearing of natural forest has very different implications on the maintenance of biodiversity richness.”

Indonesia itself, in a report to the UN’s Framework Convention on Climate Change (UNFCCC) in 2009, estimated forest loss of 1.1 million hectares annually from 2000-2005.

Margono’s study found the biggest losers were lowland and wetland forests in Sumatra and Kalimantan, where trees are typically chopped down by loggers for use in farming.

In other islands or island groups — Papua, Sulawesi, Maluku, Java and Bali and Nusa Tenggara — primary forest cover fell back only slightly or remained stable from 2000-2012.