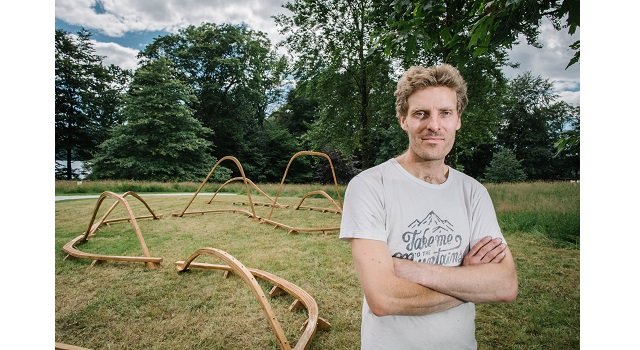 Cumbria based artist Charlie Whinney has been commissioned to produce a new striking sculpture in celebration of the Lake District’s newly awarded UNESCO status and the continued inspiration the area provides for contemporary artists.

Jointly commissioned by The Forestry Commission England, Lakes Culture and the Lakes Alive, the piece – entitled ‘Mountains We Made’ is created from a series of ten steam bent sections. The oak for the sculpture has been sustainably sourced from Grizedale Forest.

The sculpture is to be a touring piece and will first be displayed at Brockhole, Windermere from July 12 where it will remain on show for the summer. The piece then goes to Lakes Alive Festival (lakesalive.co.uk) September 8-10. In January it will come home to Grizedale Forest as part of the forest’s famous permanent collection.

Grizedale and the wider Lake District has inspired many of the world’s greatest artists, writers and thinkers over the years and the landscape is still a source of inspiration today challenging the traditional perceptions of what culture in the Lake District means.

Locals and visitors across the Lake District are being invited to celebrate the UK’s latest World Heritage Site this weekend by coming together for a Picnic in the Park! Marking the first weekend as a UNESCO World Heritage Site (July 15-16) lovers of the Lake District are encouraged to take a trip to their favourite picnic spot, café, garden, forest or lakeside view in the National Park and share their photos using #WeAreTheLakes, which will appear on lakesworldheritage.co.uk.

Artist Charlie Whinney says ‘this piece is inspired both by the landscape, the layering of human intervention and the work of Hundervasser in his pieces which employ a system of spirals in which to pull the viewer through the image. There is a layering process and journey of production which I wanted to bring together in a new landscape in which to think, play and wander through.’

Arts Development Manager for the Forestry Commission Hazel Stone says, “Grizedale is a working forest managed by the Forestry Commission. Known as ‘the forest of firsts’, it has a rich history and legacy of being the first forest in the UK to develop publically accessible sculpture trails. We are delighted to be working with Charlie and his team on this piece, which is fabricated from wood from the forest, and will from part of the permanent collection here at Grizedale Forest later in the year.

“For almost 50 years Grizedale has been a site for creative enquiry, responding to the unique forest setting and the people who live and work here. There is something very beautiful about Charlie’s contemporary approach to traditional processes and natural materials which makes this a fitting new addition to the collection.”

Charlie Whinney’s body of work includes large-scale installations in Asia, USA and Europe working around themes of sustainability and the environment. The studio settled in an ancient barn nestled under Whitbarrow Scar on the Witherslack Estate in 2009.