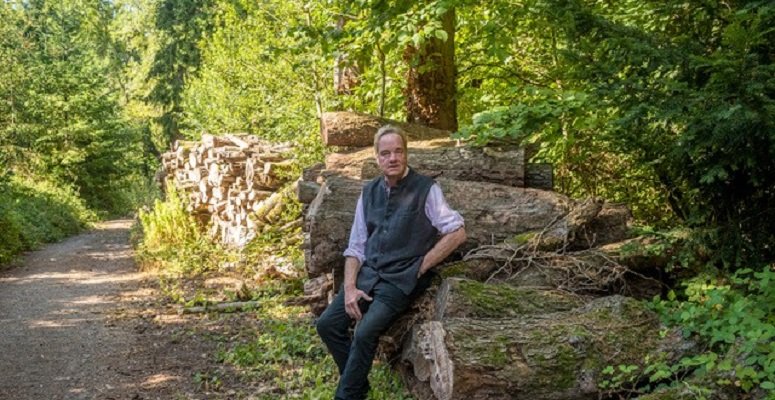 The Royal Forestry Society’s new President Ben Herbert is speaking from experience as he warns time is not on the side of all those who love forests.

Adapting woodland for the future is his number one priority. It is a topic he is grappling with every day.

Ben oversees the 5,000-acre Llanarth Estate in Monmouthshire, south east Wales, where he was brought up. It includes 445ha of mixed forest. There they have suffered both from ash dieback and from Phytophthora ramorum in larch.

He says: “As a result we have harvested the majority of our ash and larch. Any remaining stands will be felled within the next six to twelve months. We are now looking at including more exotic tree species which will all be UK sourced – tulip trees (Liriodendron tulipifera), Californian buckeye (Aesculus californica) and eucalyptus (Eucalyptus gunnii or E. globulus). This will help spread out risks and retain canopy cover should more traditional species be devastated by diseases or pests in the future, or fail due to a changing climate.”

Planting new woodland alone, he says, is not the answer. Adapting existing woodland to withstand an uncertain climatic future and the prospect of new tree pests and disease in the UK must be the number one priority.

He says: “That requires sufficiently qualified people to undertake the planning and the proposed tree planting and to provide ongoing maintenance and eventual harvesting. The RFS is trying to address this issue with its Forestry Roots programme and other training events. Universities and colleges must step up to train the foresters and the researchers of the future.”

Ben Herbert becomes the RFS’s 76th president today (October 4). He succeeds Sir James Scott whose term of office has come to an end.

“I myself am very honoured to be President of an organisation that is fast approaching its 150th anniversary. It is heartening that the eyes of the UK Government, and much of the world, are on the potential for woodland to mitigate some of the impacts of climate change. In King Charles III, a former President of the RFS himself, we have a known advocate for woodlands.”