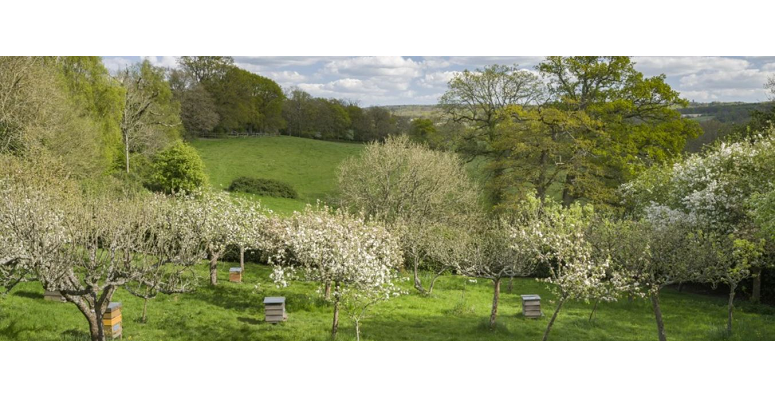 Results are published as the conservation charity kicks off this year’s #BlossomWatch campaign, now in its second full year.

BlossomWatch is the Trust’s annual campaign to encourage people to enjoy and celebrate spring blossom, with the aim of embedding an annual cultural event similar to Japan’s ‘hanami’ in the UK.  It includes digital sharing of images as blossom sweeps up the land from south to north, and events and installations at National Trust places including everything from ‘blossom hammocks’ to painting workshops.

Last year the Mayor of London Sadiq Khan and National Trust Director-General Hilary McGrady opened the London Blossom Garden and this year there will be city-wide installations in Birmingham as part of the Birmingham 2022 Festival.

This study is the first comprehensive review of both traditional and modern orchards in England and Wales using data from the National Library of Scotland’s historic map collection, data from People’s Trust for Endangered Species (PTES) and Natural England, and analysed using artificial intelligence (AI) mapping technologies from ArchAI Ltd.  It is aimed at improving understanding of the historic loss of blossom across landscapes, and the impact on nature and wildlife.

The results reveal a loss in orchards of 56%, with just 43,017ha left growing today – equivalent to an area slightly larger than the Isle of Wight.

The research also exposed a huge 81% decline, (78,874ha), in traditional orchards in England and Wales – equivalent to an area close to the size of the west Midlands – spelling bad news for nature.

And, even when taking each country in isolation, England’s figures alone revealed a loss of 82% of traditionally managed orchards (77,926ha) – twice the size of the Isle of Wight.

In Wales a loss of 948ha of traditionally managed orchards, 48%, since around 1900, is significant but compares much more favourably than England, likely due to the number of orchards in Wales which are small  family-scale orchards that are not exposed to the development and modernisation pressures experienced in England, particularly in the commercial sector.

Tom Dommett, Head of Historic Environment at the National Trust says: “Using cutting edge technology we now have a much better understanding of how we’ve managed landscapes in the past, which is invaluable when thinking about how to tackle the nature and biodiversity crisis that we are facing, and restoring nature.”

Looking in more detail at orchard loss in the regions, the north of England, whilst being home to only a relatively small proportion of the orchards in England and Wales in 1900, has seen the largest regional declines in orchard area, with 80% in the north-west, 78% in the north-east and 77% in Yorkshire and Humber.

However, the south-west, which was home to the largest area of orchards at the beginning of the 20th Century, has experienced the loss of nearly 24,000ha (around 74%), over twice the size of Bristol – of its orchards, the single biggest loss in terms of hectares of any region.

London and the south-east fared much better with the smallest overall orchard losses of 24%, largely due to the number of significant modern orchards which have been planted. However, the region has seen a reduction of 84% in the area of traditional orchards, representing big losses in nature value.

John Deakin, Head of Trees and Woodland at the National Trust says: “Traditional orchards and the blossom they bring creates valuable early nectar sources for insects which are often foraging for scarce resources in the early spring.  These native, historic varieties, together with other trees like blackthorn and hawthorn which also have amazing spring blossom, mature at a faster rate than other larger native species such as oak.  They therefore provide an important bridge for insects that rely on their particular eco systems which is one of the reasons why planting more blossom trees is such a vital part of our ambitions.”

The Trust is also continuing with its plans to bring more blossom back into cities – with a new project in Birmingham this spring – a city which was described historically as a ‘town ringed by blossom’.

In Birmingham in 1900 there were 186ha of orchards compared to just 29ha today – with a further 0.5ha of modern orchards.  Unsurprisingly, cities have experienced many of the biggest losses as they have grown in size.

As part of the Birmingham 2022 Festival, a six-month celebration of creativity which surrounds the Birmingham 2022 Commonwealth Games, the Trust is creating two pop-up blossom gardens in the city centre, thanks to support from players of People’s Postcode Lottery, at Birmingham Cathedral and at Edgbaston Street.

The trees will then be moved from their temporary homes to form part of a display for the Games in Birmingham over the summer, before a legacy planting programme starts in the autumn. The ornamental cherry trees, plus more than 500 blossoming trees to include apple, pear, plum will be planted to recreate a symbolic ‘ring of blossom’ around the city, following Birmingham’s 27 mile, iconic, circular number 11 bus route.

Annie Reilly, the National Trust’s blossom programme manager says: “Many of the orchards which were once on the peripheries of our towns and cities in the 18th and 19th Centuries have been lost with urban expansion and often remain as map evidence or street names only.

“Here in Birmingham we are aiming to recreate botanical history, recreating the shadow of past orchards that encircled the city through ornamental cherry tree planting.  Our trees will join the city’s thousands of street trees to ensure that more of the city can enjoy this fleeting moment of spring.”

With the blossom season now upon us, the National Trust and the Orchard Network, will be particularly encouraging people to celebrate the joy of blossom at the end of April.  For more information visit www.orchardnetwork.org.uk/orchard-blossom-day and www.nationaltrust.org.uk/blossom-watch