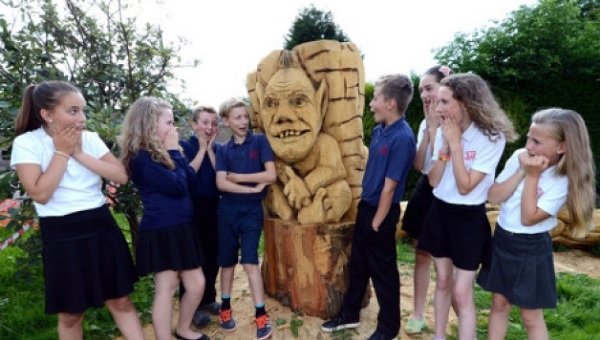 An historic tree that had to be chopped down has turned over a new leaf – after being made into a magical-themed artwork.

The grand old oak on Melbourne Road, Stocksbridge, thought to be 270 years old, was earmarked for a city-wide felling programme to the dismay of residents who launched a campaign.

Council bosses said it was badly diseased and presented a risk to the public and it was removed by the Streets Ahead highways improvement team.

But the tree will now live on in the community after the trunk was turned into an intricate sculpture and bench by youngsters at Stocksbridge Junior School.

Pupils worked with chainsaw sculptor Lorraine Botterill to carve fairies, mushrooms, ogres and an octopus into the wood using chisels and mallets as part of a project lasting weeks.

Lorrraine, who is based in Sheffield, said: “The pupils absolutely loved it and both children and parents have been coming to look at it to check progress, talk and ask questions, so the feedback has been really positive.”

The tree had a disease called ‘chicken of the woods’, a type of fungus that causes brown rot and the wood to become brittle.

It was the last oak in the vicinity of Oak Avenue and residents wanted a replacement on the same spot.

A new tree is to be planted at the school, rather than on Melbourne Road, as the pavements are too narrow.

It will sit alongside the sculpture and bench so generations of people can learn about the tree.

Jeremy Willis, arboricultural operations manager at Streets Ahead, said: “We only remove trees as a last resort, when they are dead or dying, diseased, are causing damage or could become a danger to those passing underneath.

“Unfortunately this oak had to be felled but I am really pleased something could be rescued and it could be transformed into this amazing sculpture and bench.

“Lorraine and the children have done a brilliant job and the people of Stocksbridge will be able to enjoy their work for years to come.”