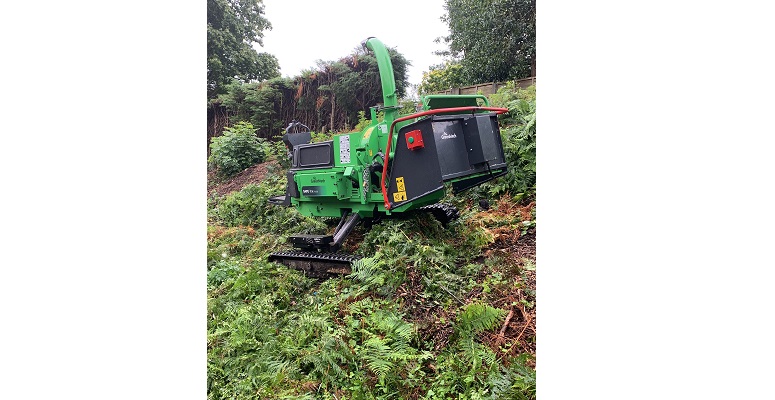 GreenMech’s new pivoting track extension system has proven itself to be a real game changer for Scotland’s South West Arb. With an increasing number of rail-side de-veg projects demanding work on steep embankments, the SURE-Trak’s ability to perform in even the most challenging of environments saw owner Stewart Ball taking delivery of the first SURE-Trak 19-28 woodchipper in the UK earlier this year.

“When I established South West Arb five years ago, the first thing I purchased was a GreenMech SAFE-Trak chipper” explains Stewart, who now heads-up a team of 15. “My previous employer had been a longstanding user of the SAFE-Trak units and, having looked at other machines, when it came to working on embankments or challenging terrain, no other chippers came close.” After quickly adding a second SAFE-Trak to his fleet, Stewart then heard about the launch of GreenMech’s next generation track system, SURE-Trak.

Allowing safe traversing of slopes in excess of 35 degrees, the pivoting SURE-Trak assemblies allow each track to maintain contact with the ground independently, while following differing contours, to provide a surer footprint and improved stability. “When I saw what the 19-28 fitted with SURE-Trak system could do, it was a complete game changer. It can get absolutely anywhere and the ability to tilt the body means it’s now even easier and safer for the operator to feed in material, no matter the embankment angle.”

To help in the delivery of power line and railway contracts, Stewart was delighted to take delivery of his SURE-Trak 19-28 from local dealer Lloyd Ltd, in January 2019. “Not only can they reach any given location, but the actual chipping performance is second to none. The powerful rollers will pull in even the most awkward forked material for the disc blades to process. Keep these sharp and they won’t skip a beat.” Stewart concludes, “Since we’ve had the SURE-Trak, it’s been working on embankments that other chippers could only dream of getting to!”