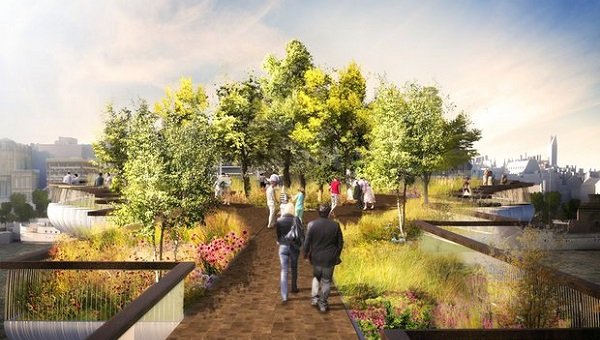 The future of the proposed garden bridge of London has been left uncertain after concerns that too much public money is to be spent on its construction. The works were halted by London’s new mayor, Sadiq Khan.

Khan officially backs the plan for the 367 metre tree and plant-filled bridge, but only on the condition that no more public funding is made available for its construction. As of date, £60m of public money has been committed to the £175m structure.

The Garden Bridge Trust says the bridge from South Bank to Temple, featuring 270 trees and thousands of plants, will be a “tiara” for London. The bridge will act as both an iconic landmark and a vital pedestrian bridge.

But critics, which include councillors and the MP representing the south side of the bridge, and members of all the main parties on the Greater London authority (GLA), complain it is a vanity project with no practical use in a part of central London already well served by bridges and awash with visitors.

The delay arises just over a week after the National Audit Office announced it was investigating another element of the public funding for the bridge, the £30m of £60m given by the Department for Transport. Separately, the Charity Commission is looking into the spending of the Garden Bridge Trust, which is behind the project. The trust was due to repay the £3m for the work at Temple tube, so it is possible the work will begin again. However, Khan’s decision both risks delaying completion of a project due to open in 2018, and illustrates how less sympathetic the new mayor is to the Thomas Heatherwick-designed bridge than his predecessor, Boris Johnson.

However, the Garden Bridge Trust says it is confident the committee will find no issues with the spending, and that work will resume soon at Temple.

A spokeswoman for the trust said: “London Underground has completed initial work at Temple. Its work is now paused whilst the trust completes all required planning and land matters ahead of starting full construction.”

She added: “Once all planning and property matters have been resolved, the next phase of the London Underground work will commence. All works will be paid for by the trust. It is full steam ahead across the planning priorities and fundraising is also very active.”