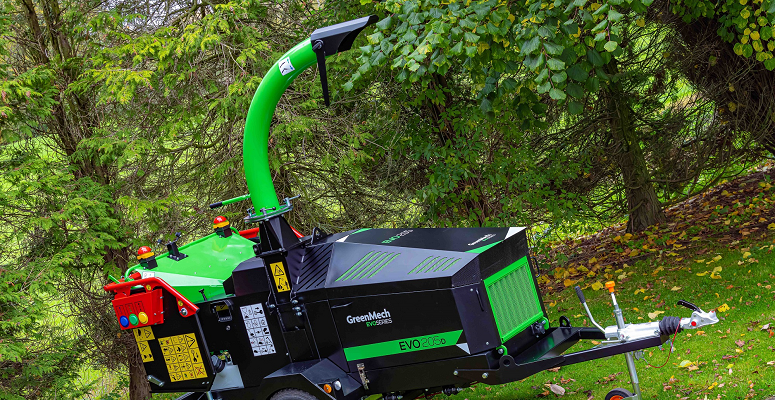 GreenMech has kicked off the year with a raft of new woodchippers ‘to meet the demands of today’s professional arborist’. With the full effects of the Stage V Emission Regulations coming into force in June 2021, GreenMech will be introducing a range of new engine options across its Quad and Arborist collections, along with more additions to its revolutionary EVO series.

With June being the revised cut-off date for the manufacture and sale of pre-Stage V engined units, GreenMech is ready to introduce new compliant diesel engine options along with extending its petrol offering across some of its most popular ranges. This year sees the introduction of a 25hp Kubota diesel engine in the QuadChip and QuadTrak 160D models (replacing the non-compliant 34hp engine), along with a 37hp petrol option for the QuadChip and QuadTrak 160P. Fitted with the 37hp Vanguard petrol engine, the 160P machines offer comparable performance to the diesel-powered alternative, but at a reduced cost.

Further up the range will be the introduction of the Arborist 200P, powered by a 57hp Kubota petrol engine. The Arborist 200P will boast impressive torque and pull-through from the massive 200mm x 280mm letterbox opening, making it ideal for handling large quantities of bulky material.

Alongside engine upgrades, GreenMech will also be launching further expansions to its EVO 165 series. Since the original EVO 165D came to market, the evolution has continued with a tracked variant and more recently the introduction of a SUB-750kg petrol machine. Joining the line-up in early 2021 will be the EVO 165PT – a fixed-track model with the 37hp petrol engine – and a SAFE-Trak variant of the original EVO diesel model which will become the EVO 165DST.

In addition to the new tracked models, the EVO concept of powerful bite, torque and throughput will be extended further with a new eight-inch product line. The EVO 205D will feature a Stage V compliant 50hp Kubota Diesel engine and new GreenMech ‘Smart Sense’ Controller, for intelligent feed speed and a Smart Economy option for optimising fuel economy. Available at launch in road-tow format, SAFE-Trak and SURE-Trak versions of the EVO 205D are due to follow later in the year as replacements for the 19-28 models.