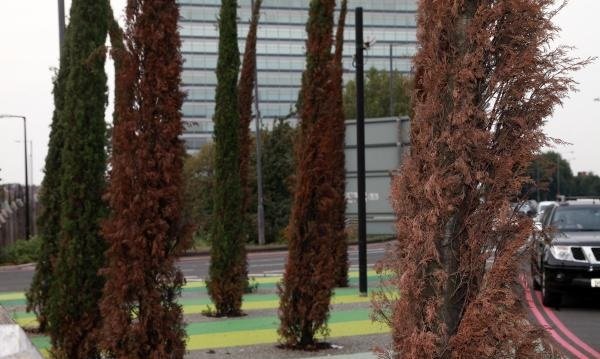 After two broken promises to replace the dead trees on Tolworth greenway, Kingston Council has set yet another deadline for its contractor to fix the problem.

After the Surrey Comet reported last July that the supposedly “hardy” Italian cypress trees had become brown and threadbare, contractor North Midland Construction said the trees would be replaced in September.

When that deadline was missed, Kingston Council claimed the work would be carried out in December.

Now the authority has said nothing will happen until March – 10 months after the promise was first made.

A council spokeswoman said: “The trees that haven’t successfully established are due to be replaced by the contractor before the end of the planting season, which is the end of March.

“The work will be carried out entirely at the contractor’s expense.”

Firefighter Simon Jakeman, who stood as a Green party candidate in May’s local elections, said: “Its so sad to see the dead trees still there after so long.

“Let’s hope the new deadline will be the final one. Its about time the greenway had some green growth on it. We’ve already waited far too long for replacements.”