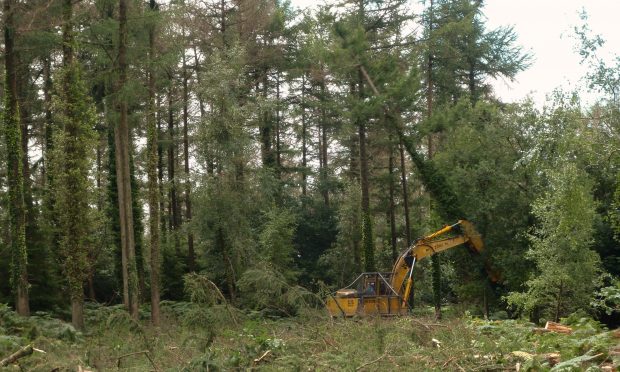 Culling animals infected with an untreatable disease is a distressing job for all farmers. For those of us who also grow trees, the same applies when disease strikes the woodlands.

Now, for the second year running, diseased larch trees have been found in Highland Perthshire and Angus.

Caused by the fungus-like phytopthora ramorum, the disease has ravaged woodlands in south-west Scotland since 2011. It appears to have its origins in the horticultural trade, where it was first spotted in the UK in 2002, spreading to larch trees in 2009 in south-west England.

Its other hosts include rhododendrons, in which it can maintain infection sources.

The appearance of the disease is potentially disastrous for the area’s woodlands and a blow for the tourist industry, especially in Highland Perthshire.

Promotions such as ‘Autumn Gold’ have been built in part on the back of the larch tree, whose yellow colours are a key part of the autumnal landscape.

Wildlife interests will suffer as the larch is favoured by many species, including the red squirrel.

But the actions of the Forestry Commission may, inadvertently, hasten the removal of this tree from our woodlands.

In response to the disease, the Forestry Commission has effectively split the country into two zones – one in the south west of Scotland where it is accepted that the disease is present and hopefully contained, and another for the rest of the country.

For this wider zone, the current policy is to issue compulsory felling orders on finding the disease symptoms (but not necessarily a positive identification). This requires the removal of all larch trees within a 250-metre radius, equating to nearly 50 acres.

The logic is that speedy removal of infected trees will reduce or eliminate the spread of disease and so maintain the tree in our woodlands.

But this very policy could hasten the loss of the larch from our hills.

Growers face a severe financial penalty on selling larch trees as a result of the compulsory felling orders. Such timber has to be processed in specially licensed mills and the bark has to be destroyed, all of which adds considerably to costs.

A glut of larch in the market does not help sale value, and the overall result is that growers can see returns reduce by half to two-thirds.

Although there is some limited grant aid for felling young stands and restocking, there is no proper compensation payment, compared with that found in the livestock industry when tuberculosis is suspected.

All of this means growers will aim to reduce their risk and get larch to market before the disease occurs.

Although the Forestry Commission controls felling through their licensing system, this is unlikely to prevent a large-scale switch away from larch over the coming years.

A further problem with this approach is a reduced chance to see if there is any natural resistance to the disease. This policy is in stark contrast with that used to combat disease in other species like ash or scots pine.

We must find another way of dealing with this problem in larch because, if we do not, we seem sure to hasten the loss of this beloved tree from our landscapes.