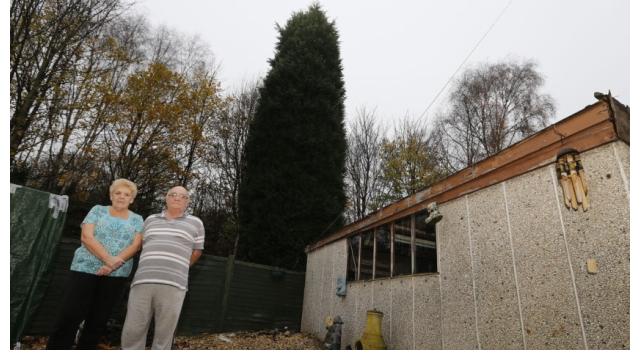 An elderly couple say they are “terrified” a 75ft conifer will fall and crush their bungalow, after Network Rail refused to chop it down.

The huge tree stands on railway land at the back of Geoff and Joan Sagar’s home on Manor Crescent, Walton.

Mr Sagar, 81, asked Network Rail if they would cut back the tree, fearing it would fall onto their house in high winds.

He said: “It’s a beautiful tree there’s no doubt about it but when the wind blows it is dangerous.

“There is about 45ft from the back of our house to the tree and with the size of it, if it came down it would come through the roof of our property and would likely do the same to our neighbour’s house.

“But even if I was to, I would then be penalised for trespassing on railway property.

“I just wanted someone to come out and take half of it down to make it safe again.

“My wife and I, we are not sleeping properly with it being so windy because we are so worried about it falling.”

After twice sending out a team to investigate and take photos, Network Rail sent Mr Sagar a letter stating the tree was “privately planted”.

It explained the company do not “plant, maintain or deal with conifer issues”. But said he could cut back the tree himself as long as he did not trespass on or near the railway line.

Coun Albert Manifield, Crofton, Ryhill and Walton councillor, said: “The conifer is at the side of the railway bank. In my opinion what Network Rail should be doing is coming out and cutting it down to make it safe for Mr Sagar and his neighbours.

“It is absolutely ridiculous to say to him that he can cut it down but cannot trespass on railway land. That’s near impossible.”

A Network Rail spokesman confirmed the tree, which Mr Sagar said has been growing since the couple moved in 32 years ago, was on company land.

He said: “If any tree was posing a threat to the operational railway or if we thought it posed a risk to people and their houses, then we would cut it down.

“We carry out surveys to see if trees are dead, deceased or decaying.

“This particular tree is healthy and we do not cut down healthy trees if they are not considered to pose a threat to safety.”