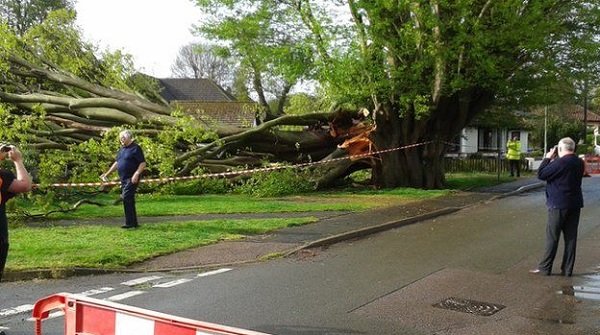 Neighbours told the BBC they had heard “a terrific crack” as part of the 30-metre Caucasian Elm, thought to have been planted in 1760, fell.

Firefighters helped residents from their homes in Park Drive, Worlingham. One of the properties was left structurally unsafe.

Suffolk County Council, which owns the tree, said it was inspected regularly.

Waveney District Council said the tree was considered of “national significance” because of its size and species.

Ray Pagram, who lives in one of the damaged bungalows, said he was woken at around 02:30 BST.

“There was terrific crack and I thought it was thunder at first,” he said.

“Then I heard the sound of running water coming through the ceiling and I realised the tank in the loft had been struck.”

No-one was hurt by the tree fall.

Derek Oldham, of Suffolk County Council, said the tree had a “visual inspection” in February 2015 and in January 2014 and there were no outward signs of damage.

They had installed a root barrier to stop “root infiltration” to other homes. Asked if this could have brought the tree down, he said: “It’s a bit early to say.

“Our initial inspection suggests not – the side of the tree that is collapsed is not on the side where the root barrier is and there’s no obvious sign of movement within the ground,” he said.