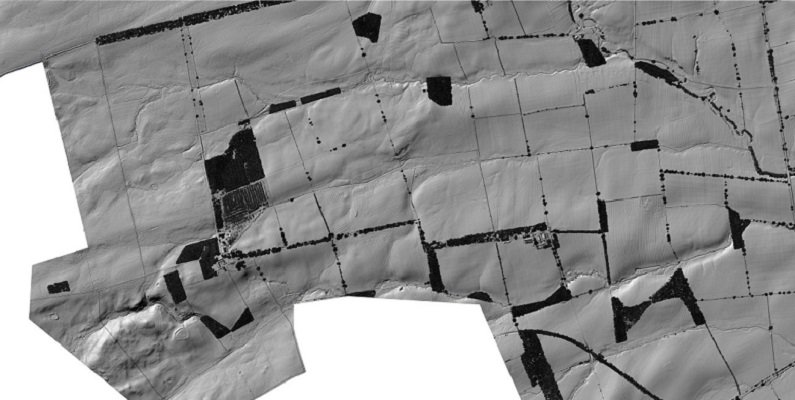 The planting is part of the conservation charity’s ambitions to plant and establish 20 million trees by 2030.

Funded by the Government’s Green Recovery Challenge Fund, the £800,000 project has used LiDAR (Light Detection and Ranging) technology to unearth fascinating insights into farming practices and other archaeological aspects of the landscape dating back to 2,000BC with these areas to be conserved and protected while informing new areas for tree planting, hedgerow creation and river management.

The work starts this autumn with plans to plant 13 hectares of woodland with native species which will cope well with the semi-upland conditions such as hawthorn, hazel and alder; and 10.5km of hedgerows including blackthorn, guelder rose and dogwood to help reverse the decline of wildlife, restore natural habitats and create more carbon storage.

By boosting these habitats and creating more wildlife corridors, one of the key aims is to help ensure the estate’s resident species including the endangered red squirrels, bats, white-clawed crayfish, woodland birds and farmland butterflies will have more space to move around the estate and thrive.

The aerial LiDAR survey, carried out in February, is the biggest ever conducted by the conservation charity across 57 square kilometres of the 5,431 hectare (13,420 acre) estate.

LiDAR uses the pulse from a laser to collect precise measurements between a light aircraft as it flies over the landscape and the ground to produce a minutely detailed map of the ground surface.

The results are so detailed that they can often reveal features that are not readily discernible to the naked eye allowing researchers to penetrate vegetation cover to identify features concealed by trees and undergrowth.  It can also be used to map ecological features like water courses.

The initial analysis which has concentrated on the area where the majority of the new trees are due to be planted, has revealed fascinating details of Wallington’s archaeology dating from 2,000BC to 1,900AD including traces of historic, healthy woodlands dating from the mid-eighteenth century which were cleared and not replanted.

This information will help the team make critical decisions on where new trees and hedgerows should go, new fences erected and site access points to minimise the impact on the landscape’s archaeology.

By basing new planting plans on historic planting schemes the team also aims to create even more habitat benefit as well as restoring lost features of the historic environment.

Over 120 new archaeological features have also been discovered, covering more than 85 per cent of the ground surface in some areas, reflecting the estate’s agricultural history.

Findings of particular interest include early farming systems which were cast aside in the 18th Century by the previous owner, Sir Walter Blackett’s, desire to make way for “rational” and efficient farming. These include at least half a dozen different forms of ‘ridge and furrow’ cultivation which together with the estate’s documentary record will help with dating other features in the landscape such as the field boundaries – the Northumberland ‘cast’ field banks stone walled to each side.

Previously recognised Iron Age ‘camps’, like mini-hillforts, estimated as dating from the centuries immediately prior to the Roman invasion, have been surveyed with greater precision, to reveal more eroded outlying features, possible annexes to the main enclosures, linear features potentially of adjoining fields or enclosures, and even suspected prehistoric pathways.

Other discoveries include numerous squarer features of a similar type believed to date from Roman times, and previously unknown landmarks include a 17th Century recreational landscape – which would have been an important part of the whole estate aesthetic, with a large artificial water feature, surrounding walk and possibly associated terraced gardening set in a small hunting park.

National Trust Archaeological Consultant Mark Newman said: “This is an exciting moment in the 5,000 year history of this special estate. The LiDAR findings have shone a light on much more than we could have imagined so that we can better understand the history of the landscape to help inform plans for its future. Embracing, valuing, understanding and respecting the cultural landscape is completely complementary to planting for the benefit of the natural environment we must achieve, through planting projects like this, in our fight against the climate crisis.  “

“We can now plant with confidence, selecting areas for planting that avoid damaging any significant archaeological remains.  But, and this is one of the things we are really excited about, we can now actually recreate areas of lost historic planting which we didn’t previously know about.  It makes sense to mirror history.  These areas should deliver even more habitat benefit than was originally intended and once again contribute to the picturesque qualities of the landscape while also restoring lost features of the historic environment.