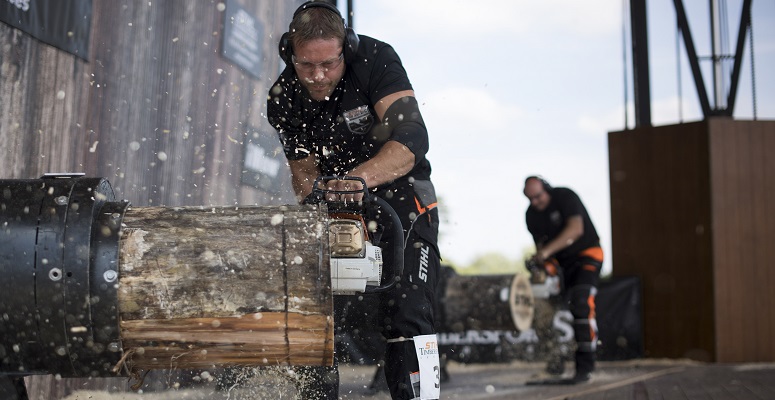 The best lumberjack athletes in the country will take part in the STIHL TIMBERSPORTS® British Championship in August as they smash through six logs in a matter of seconds using a combination of axes, saws and sheer strength.

To take home the title of the best TIMBERSPORTS® athlete in the UK, competitors are awarded maximum points for the fastest time and must display power, precision and endurance in all six disciplines. Competitors will include four-time British champion Elgan Pugh, who is aiming to win his fifth consecutive STIHL TIMBERSPORTS® British Championship.

Visitors to the STIHL stand are invited to watch the action unfold, and then try out TIMBERSPORTS® for themselves with the brand-new Virtual Reality Experience, which gives people the chance to virtually test their skills on the TIMBERSPORTS® Stock Saw discipline. A competition will be running throughout the event and the person with the fastest time will take home their very own STIHL cordless chainsaw and Personal Protective Equipment, worth over £550 RRP in total.

The 2019 Rookie Championship will also take place at BBC Countryfile Live on Sunday 4 August, which is for athletes who are under 25. The top eight rookies from around the country will compete against each other across four of the six TIMBERSPORTS® disciplines, accumulating points in each round based on their placing in each discipline. The athlete with the most points at the end of the fourth round will be crowned the 2019 STIHL TIMBERSPORTS® British Rookie Champion.

To find out more about the STIHL TIMBERSPORTS® Series please visit https://blog.stihl.co.uk/timbersports/

Springboard – athletes slot two springboards into a vertical tree trunk then chop through a block of wood at the top of the tree, nearly 3m above the ground

Stock Saw – athletes race to cut two timber “cookies” with a chainsaw from a horizontally set log. The cookie must be complete and within a defined thickness