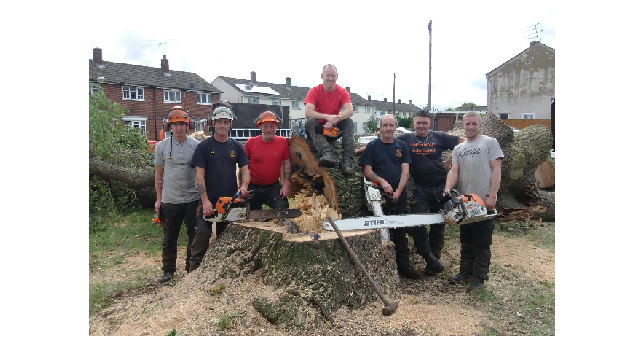 Tree surgeons inspecting the fallen remains of a mighty oak that pre-dates the estate built around it have revealed they are none the wiser as to what caused it to split in half.

Residents described the walls of their homes shaking when the tree came down on the corner of Hanbury Road and Cranmore Avenue shortly after 4.30pm on Wednesday.

Police were called in to direct traffic while Swindon Borough Council tree surgeons cleared the fallen half of the tree – affectionately known as the Hanbury Oak – which surgeons initially thought to be between 150 and 180 years old.

Tree surgeon Tom Mconnell noticed the crack in the tree last night on his way home from work and quickly rang the team to ensure the tree didn’t become a danger.

He said: “I always look at the tree when I go past, you get into the habit of it.

“I just noticed the split in it and thought someone should come out and have a look at it, meanwhile I was telling everyone to keep back.

“In my kitchen I could hear it creaking.”

The fallen part was removed from the road on Wednesday evening, but the rest of the tree was deemed safe enough to remain in place overnight until a team of tree surgeons arrived to cut it down today.

But, having cut the tree down at its base, they are still unsure as to what caused the tree to split, after discovering it to be healthy.

Tree surgeon supervisor, Simon Fear, who helped bring the tree down with brother Martin and son Jake, along with a team of surgeons from Swindon Borough Council, said: “I would have thought it is closer to 200 years old, it is a big tree with a good girth on it.

“It is sad it had to come down, but it was the only option.

“People think tree surgeons like cutting trees down, but our job is to be a buffer between the public and the trees – we are a happy medium, ensuring the public are kept safe.

“I was up here four years ago removing telegraph wires from the tree, and I have been up at least five times checking it over.”

The surgeons discovered a small area of rot in the centre of the trunk at the base, but could find no reason why the tree should split where it did.

The large piece of the trunk will be left in place for the time being, having been made safe by the surgeons.

The top parts are being chipped down and chippings have already been delivered to one local school for its conservation projects.

Simon said: “We do become attached to certain trees, but sadly some of them do have to come down due to safety.

“But there is no reason why it should have split like it did.

“We could have climbed this last week and we wouldn’t have seen anything, there is nothing here to suggest why it came down, I guess it was an act of God.”