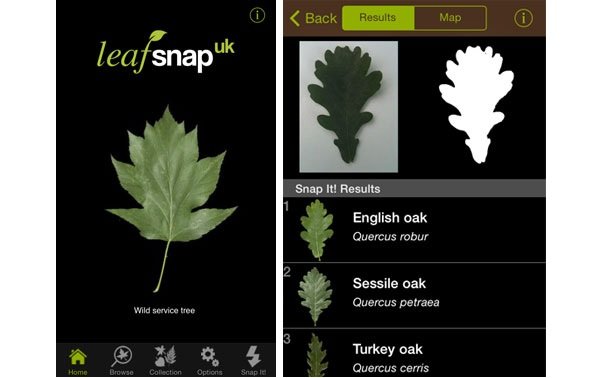 A free app for iPhone created by the Natural History Museum, using technology similar to facial recognition software, enables users to take a simple photo of a leaf and have it matched to a database of 156 tree species.

Its launch coincides with the UN’s International Day for Biological Diversity on 22 May, created to promote understanding and awareness of biodiversity issues worldwide.

As well as instant species identification, the app also contains more than 2,000 high-res images of tree features, such as flowers, fruit, bark and leaves.

Fact files are also available, including information on whether the tree is native or introduced, where it grows, when it blooms, and other clues to help with identification.

Whenever users take and upload a leaf photo, the image and geographical location is added to the Leafsnap database. This information can then be used by scientists monitoring the UK’s tree population, the effect of climate change on trees, and in general biodiversity research.

This type of crowdsourcing is becoming an increasingly popular way to help scientists monitor species and the environment.

Museum botanist and identification expert Dr Fred Rumsey, who helped develop the app, said he hoped it would encourage people to explore the UK’s fantastic diversity of trees.

‘I hope the app inspires people to spend time outside, enjoying their local green spaces and perhaps to even get involved with some of our other citizen science projects,’ he said.

Museum scientists working in the Angela Marmont Centre for UK Biodiversity worked with the teams who created the original Leafsnap app in the US, which launched in 2011.

The botanists used their expertise to choose the species to be included in Leafsnap UK and to collect the thousands of leaf, flower, fruit, cone, seed and bark specimens featured. They also researched and wrote the descriptive text for each tree.