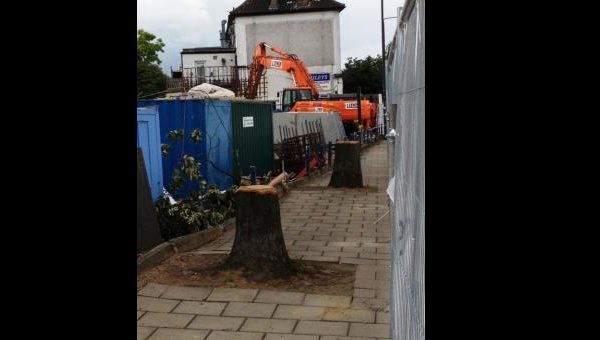 Residents are furious after two much-loved oak trees on a public pavement next to a housing development were “massacred” without notice.

Positioned less than a metre from the building site of the former Emma Hamilton pub in Kingston Road, the trees were cut down by the council because their branches encroached on the building site.

Wimbledon Chase residents’ association (WCRA) had been in contact with Merton Council’s environment officers in April over concerns the trees were protected, but received no warning the trees would be chopped down.

Grahame Darnell, WRCA chairman who returned from a business trip on Friday, July 4 to discover the trees were gone, said: “I’m fuming. This from a council that’s red hot on the environment.

“All along residents were concerned that the developers would just do whatever they liked. I assured them that there were rules and processes that had to be followed.

“Residents remained suspicious and it appears they were right and I was wrong.”

Bellway Homes was granted permission from an independent planning inspector to construct a four-storey building of 55 flats on the site, opposite Wimbledon Chase station, in April last year.

Two earlier applications were rejected by councillors and opposed by residents on grounds the plan was too big for the site.

The residents’ association had the backing of so many people in the local area and I’m just very disappointed that the council hasn’t been able to protect them.

“I know the developers are going to replant trees in the front. They didn’t have tree preservation orders on there but they weren’t on the plans.

“It’s a real shame and it’s just Merton Council’s lack of attention to detail and not promoting the borough’s assets.

“One thing that Wimbledon Chase is very proud of is it’s green heritage and it’s got some of the oldest trees in the borough there.”

A council spokesman said: “We didn’t want to see the trees go either, but the new development would have left the trees in very poor shape so we insisted that Bellway at least compensate us to enable us to plant semi-mature trees close to this location.”

Council officers have negotiated £20,000 compensation from Bellway Homes, which they will use to plant new trees further away from the site.