Mountainside in Powys to become haven for native trees 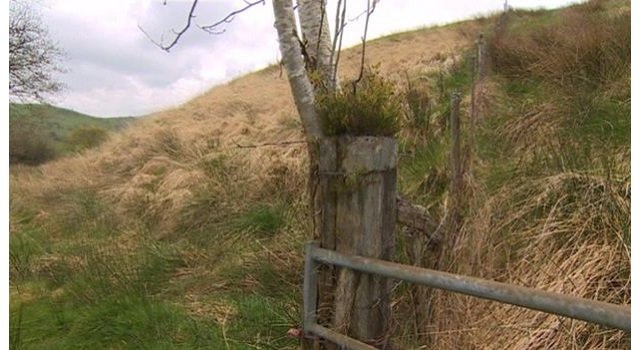 Two environmental charities are hoping to buy a mountainside in Powys to try out what they are calling “a different approach to conservation”.

The 300 acres (121 hectares) of land, formerly used to graze sheep, is up for sale at Cefn Coch near Machynlleth.

The Woodland Trust and Wales Wild Land Foundation plan to turn it into a haven for native species like pine martins, red squirrels and dormice.

They will plant 5,000 trees before letting nature take its course.

In its current condition, the mountainside is described by the charities as “neglected and ecologically degraded”, covered by a mixture of grasses and reeds.

It presents “a unique opportunity to do something a bit different”, according to Rory Francis from the Woodland Trust in Wales.

“We plan to use natural processes to recreate and restore the landscape into an open woodland with a mosaic of different habitats.”

To give the regeneration an initial kick-start, native tree species such as birch, rowan, willow and alder will be planted at the top of the mountain.

They will act as a seed source to allow the site to flourish naturally.

The hope is that over the course of 20 years, at least one third of Cefn Coch will become open, deciduous woodland, and that native mammals and birds like the nightjar and curlew will start to return.

The aim is for the public to be able to use the site too, which offers spectacular views of Snowdonia, to walk, cycle and observe wildlife.

Archaeological work could also be carried out on the site.

The project is the first part of plans to establish a network of wildwoods across the Cambrian mountains, the iconic landscape which provides a backdrop to BBC Cymru Wales’ Hinterland drama series.

The farmhouse bordering the site was used during filming of recent episodes.

Neighbouring farmer Joe Hope is also a forest ecologist and is “hugely excited” about the project, which he said is about reconnecting fragments of woodland habitat.

“I’d be delighted to see the mountainside flourish and form a habitat network with the woodlands on my land and down into the valley,” he said.

“What we’ve been observing is continual fragmentation of forest and woodland networks and with that we’ve basically seen a gradual decline in biodiversity.”

The concept of re-wilding landscapes, most famously championed by environmentalist George Monbiot, is controversial with some farmers worried about the impact it could have on their livelihoods.

It is part of the debate around the future of farming in a post-Brexit UK, which could see a review of the subsidies offered to support agriculture on our uplands.

But Sophie Wynne-Jones, from the Wales Wild Land Foundation, insisted the charity did not want to see “the whole of the Welsh uplands being de-tamed and becoming woodlands”.

“I have a lot of sympathy and respect for what farmers are doing and we’re not suggesting that the approach here is something we imagine for everywhere,” she said.

“This is just one area where we can try out something different and give nature a chance to breathe and grow.

“A lot of farmers might be thinking ‘I could do something different’. And if we can show people what the options are, get people to come and visit, contribute to tourism – it gives people the chance to consider what sorts of future they want for their land.”

An anonymous donor has already pledged £200,000 towards the scheme but the charities need to raise a further £150,000 before the end of May to purchase the land.

Mr Francis is hopeful about reaching the target, adding: “We could do something really special here and put this area of the map.”