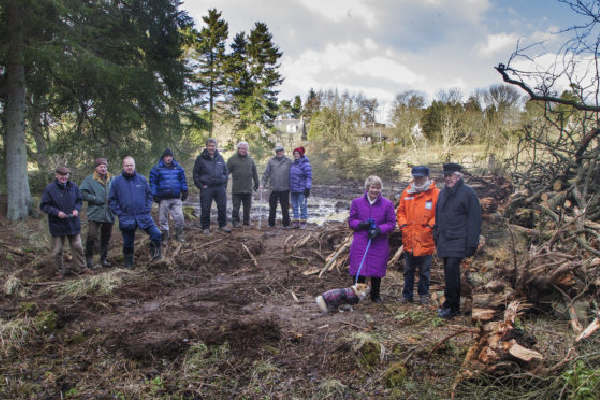 Forestry Commission Scotland said work undertaken at the former curling pond site Monikie in January to remove trees and undergrowth by Ayrshire-based Avancan Property Management were “exceptional” and likely to have had “significant effects on the environment.”

The firm was told to prepare a 10-year plan of maintenance measures to restore the land and replant trees in response to an enforcement notice by the watchdog following its investigation.

Site owner James Canavan successfully applied to dissolve his company but was given until April 30 to appeal the enforcement notice. The appeal was lodged by Mr Canavan’s solicitor Davidson Chalmers from Edinburgh.

Forestry Commission Scotland said the appeal itself and supporting documents issued “appear to challenge almost all the facts of the case.”

It asked for a further extension of 28 days to allow its solicitors to prepare a response to all the points raised and have the site assessed by a specialist woodland ecologist.

The extension was granted by the Scottish Governmemt and the new deadline for response is June 27. Mr Canavan will then have 14 days to comment on the response to their appeal. A Forestry Commission Scotland report issued following January’s investigation said the site was an important habitat for amphibians, including common toads, frogs and palmate newts. The report said more than 20 cubic metres of trees – around 150 specimens – were felled or dug up by the roots.

The tree felling in Monikie was blamed for wiping out a population of amphibians when a toad patrol was stood down in April after countryside rangers declared there was “little point” in continuing. The company denied any wrongdoing and claimed it had “sympathetically” cleared an “eyesore” site which had become a fly-tipping hotspot. The appeal claims the works did not require consent because the “threshold level” for deforestation projects not located in a “sensitive area” is one hectare.

The appeal stated: “The site is not located in a sensitive area. The deforestation works were carried out within a 0.68 hectare area within the site.”

Mr Canavan’s position is that it was: “Not likely that the deforestation works would have significant effects on the environment.” In support of this submission, he instructed independent expert opinions, which – the appeal document stated – “refute the facts alleged by FCS” on a number of matters.

These include claims with regards the effect of deforestation works generally; the wet woodland claim; the toad claims; and the cultural significance claim.