Millennium Oak and 20 trees attacked by vandals in Hessle 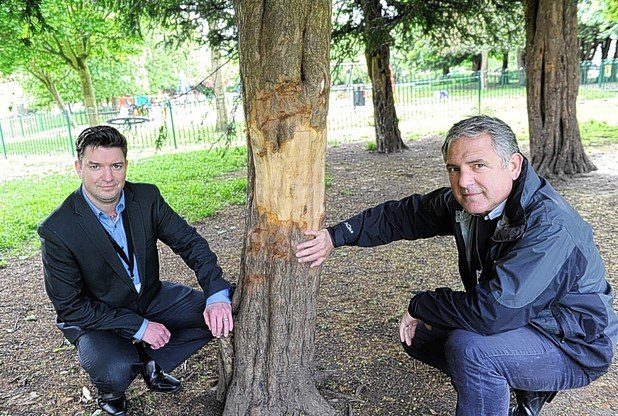 The millennium oak and 20 trees in Hessle’s Tower Hill Memorial Park have been hacked and chopped by vandals.

Hessle Town Council was alerted by resident Mark Lucas that someone with “an axe or a saw” had stripped the bark off the oak, as well as 18 yews and a rowan tree.

There are now fears many of the trees, which were planted in 2000, could be blown over in strong winds or contract diseases and die.

The vandalism, which is believed to have happened in the early hours of Tuesday, is just the latest in a run of incidents that have blighted the popular park.

Families are also worried about it being neglected and forgotten, making it unpleasant for parents and their children.

Hessle town councillor Paul Hogan, who took the complaint, said: “The children’s seesaw has been ripped up and the wooden fence has been vandalised as well.

“One of the dog gates has been torn off and another doesn’t close.

“There’s a rose bed that hasn’t had any roses for a long time.

“What’s more, there’s no memorial at the memorial park, which should be dedicated to the Hessle residents who fought in the First World War.

“We need to highlight the fact that the park needs maintaining and looking after and we need a spending plan to be put together.”

Mr Lucas, who made the complaint on Tuesday afternoon, suggested a sign could be placed to warn people it is a criminal offence to vandalise trees.

A Humberside police spokesman said that no report had been made to them.

If you spot any criminality at the park, visit www.humberside.police. uk/teams/hessle or call 101.