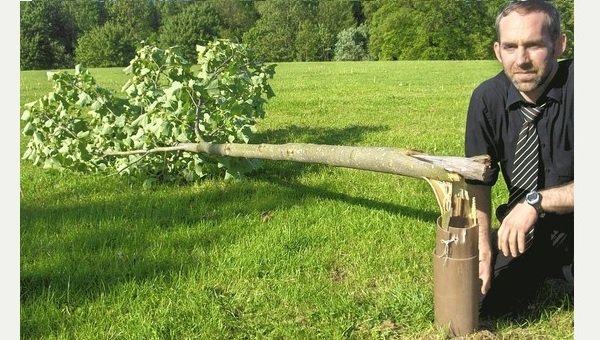 Trees in Merstham are dying and nothing is being done to save them. This is the claim of one frustrated resident who is taking matters into his own hands, installing protective guards to try to protect saplings planted in the area.

In recent years young trees have been planted in green areas around the town, such as in the Brook Road open space area and the orchard off Malmstone Avenue.

But Drummond Richardson, a computer programmer who lives close to the Brook Road green, says they are being damaged around the base of the trunk and dying as a result.

The 44-year-old claims the trees are suffering from girdling, or ring barking, a process whereby a layer of bark is removed from the trunk which causes the tree to lose nutrients and die.

Ring barking can be caused by animals or humans and Mr Richardson is now taking matters into his own hands to solve the problem.

He has installed plastic guards at the base of around 50 trees in recent months but says more needs to be done to protect Merstham’s greenery.

He said: “In Brook Road open space, near me, one young tree is dead, without leaves, just waiting to fall over. Another birch, along the playground fence, is badly damaged.

“A fellow resident told me there used to be a line of trees, that’s the last one left. What a shame, there’s a need for shade and the column would have looked nice.”

Mr Richardson, who is tackling the problem in his own time, first noticed an issue about five years ago and says he has raised his concerns with Reigate and Banstead Borough Council.

“I said they should leave guards around the trees or let the grass grow up to the base because then they are protected,” he said.

“It is happening everywhere, all you have to do is look around the area. There are trees that were planted last year near the bridge that are badly damaged already.

“The orchard around the corner is another example, I would be very surprised if more than about half of them survive looking at the state they are in.”

Emanuel Flecken, the council’s operations manager for parks, verges and green spaces said the trees are cared for with mulch to protect the base.

He added he was unaware of ring barking in the area but said the matter would be investigated.