Memorial bench could be made from felled copper beech tree 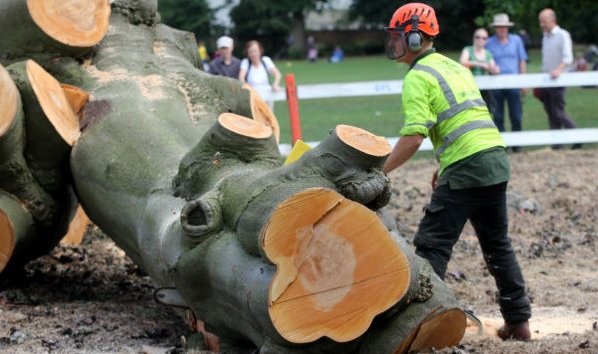 Trees left in the shade of a giant beech tree in Montpellier Gardens, Cheltenham, can now take centre stage.

But it is hoped that life will come from death as smaller trees nearby will have their time in the sun.

And the council is hoping the public will come up with ideas on how to remember the ancient tree.

Contractors worked for two days to take down the gigantic tree, which has been there for more than 200 years.

Cheltenham Borough Council tree officers were forced to take the drastic action after a large branch fell off unexpectedly on June 26.

Using chainsaws, tree removal specialists from Cheltenham Tree Services Ltd took down the 24-metre tree after cordoning off the area.

The borough council will now consider various ideas for the timber from the branches and trunk, one of which includes constructing a memorial bench.

It also wants people to start sending in ideas about what should be planted in its place.

Christopher Chavasse, senior tree officer at the Borough Council, said: “We will have some sort of memorial to it.

“We’ve saved a couple of the limbs from the tree, with a view of making a bench or something for people to enjoy.

“It will have to be hacked off and dried, of course, and it might take a while, but we will be looking for someway to remember it by.

“It is obviously subject to planning, but we are hopeful it will happen.”

An independent arboricultural specialist Hal Appleyard, had charted the progress of the internal decay since 2003. He said: “We’ve been anticipating this day arriving for around six years now, and I for one have no problem with the tree’s removal upon grounds of safety in spite of the significant efforts which has been made to reduce the risk of failure and any associated consequences.”

Replacement tree planting took place in the 1990s and 2000s, with two copper beech trees close to the chopped tree. A zelkova, which has been hiding in the shade, can cope better than the copper beech to climate change.

Mr Chavasse said: “I hope the zelkova will grow quickly. In 100 years time, it could possibly replace the copper beech we’ve just lost.

“I think it will keep growing for another 150 years, and will possible grow to the same size.”