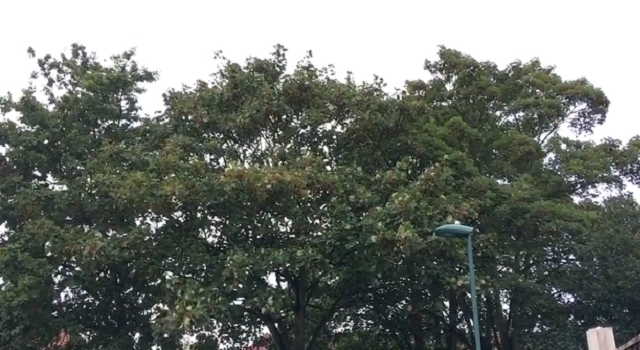 A meeting is to be held to work out what to do about Lenton Abbey’s trees. The area near the University of Nottingham is a particularly ‘leafy’ part of the city, but some residents think that trees are getting out of hand – and that it at least 17 years since they were last trimmed.

Catrina Wilmot, of Anslow Avenue, has started a petition to cut them back, and says that it has got more than 100 signatures in a week.

Some of the trees are on Nottingham City Homes’ property, and the housing organisation has agreed to attend a meeting to see what can be done about the residents’ concerns.

Miss Wilmot said: “I have lived here for 17 years and not once have the trees been cut back.

“The trees block out the light so the ground never gets dry in summer and it frosts over in winter, it’s like an ice rink.

“It’s covering up the streetlight so it’s pitch black at night.”

However according to Sally Longford, councillor for Wollaton East and Lenton Abbey, a recent inspection was carried out by Nottingham City Homes, who found that only tree on the street was dangerous enough to need chopping down.

She said that the issue would be discussed at a meeting on October 4.

She added: “We have had a number of residents complain about individual trees in Lenton Abbey. Most of them are on private and NCH land.

“I appreciate that they have concerns but you can’t go in to someone’s garden with a chainsaw and just chop down their tree.”

However Stuart Thorpe is a neighbour of Miss Wilmot and agrees with her that something needs to be done.

The 48-year-old lorry driver said: “It’s not that we do not want the trees, but we want to tame them.

“They are 20 to 25 foot tall and their branches are within feet of the house. Now winter and autumn has started, the mess on the street and in my garden is going to be horrendous.

“Branches are snapping off on a public right of way, it’s dangerous. It can be like a gale force wind when it gets going down this street and I get submerged in leaves.

“The whole estate has similar problems with overgrown trees, there’s a lot of support for getting them cut.”

A spokesperson for Nottingham City Homes said: “We are aware that these residents have concerns with leaves falling from the trees at this time of year.

“We appreciate their concerns, and are meeting with representatives from the council, including ward councillors and tree officers, next week to find a solution.

“While it’s important to respond to the issues that these two residents have reported, it is also important that the Lenton Abbey area retains its leafy charm.”