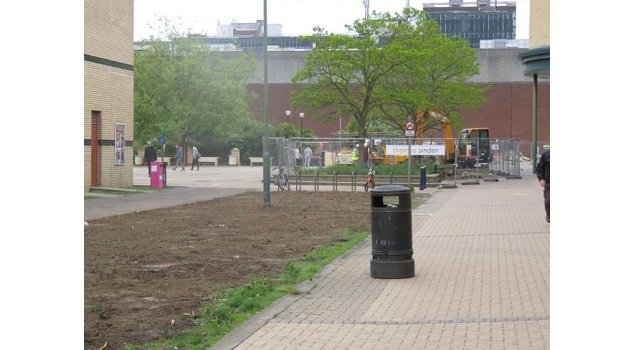 Residents are fuming after more mature trees have were cut down from Basildon Town Centre to make way for the market.

The trees, beside the Towngate Theatre, were chopped down as part of plans to relocate the market.

Originally, Basildon Council had planned to move the trees but decided they were in too poor health and chopped them down instead.

Hornbeam trees will be planted instead of them once construction of the market is completed.

Pat Rackley, of Devonshire Road, Laindon, saw that the trees had been removed on a trip into town on Thursday.

She said: “The trees there were quite well-established. I was really angry to see that they had been cut down.

“It is very sad and a shame to see them go. I know they will be replacing them, but it’s not the same as the ones that were there were quite big and they will probably just be replaced with saplings.”

Phyllis Chamberlain, 69, of Pitsea, added: “It is sad that they are being chopped down. It is a shame.”

Another shopper, who asked not to be named, said that is was “really awful”.

One lady said: “It is sad to see them go – the flower beds were only put in recently.”

A resident added: “There isn’t much to see by way of greenery so it is a shame they are being chopped down.

“We have lived here for 50 years so I think you always want things to stay as they are. I don’t know if it will be any better moving the market – we will have to see.”

Diane Southam, Basildon Council’s service manager for regeneration and development, said: “The new trees will complement the redevelopment of St Martin’s Square and land next to the Towngate Theatre.

“Public realm works will also take place to improve the church gardens and its surroundings.”

There has previously been outrage from residents after trees in St Martin’s Square were felled in July last year as part of the regeneration work.

The existing market is being moved from Market Pavement, where a new South Essex College campus will be built, to St Martin’s Square. Work has already begun on the new-look market.