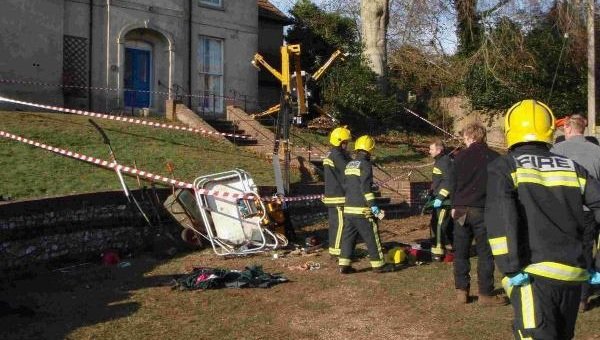 A tree surgeon has spoken of his ‘massive relief’ after winning a four-year legal battle following an accident that left him with serious injuries.

Chris Baxter was airlifted to hospital after the cherry picker he was working in toppled over. A judge has now ruled that the machine was not fit for purpose.

Mr Baxter says he wants to raise awareness of the importance of having ‘the right tools for the job’ to ensure what happened to him doesn’t happen to others.

As reported in the Echo, Mr Baxter was working from the basket of a RQG 18 E Spider cherry picker pruning trees at a property in Milborne St Andrew, when the machine slipped off its floor pads, toppled over from height and crashed to the ground.

The accident left the 33-year-old with serious injuries including a fractured spine and spinal cord injury, a dislocated shoulder, fractured ribs, pelvis and right leg and broken teeth.

One of Mr Baxter’s employees was with him in the basket of the cherry picker at the time of the accident and was also left with serious injuries.

The legal case has taken four years, culminating in a trial at the Royal Courts of Justice.

The judge ruled in Mr Baxter’s favour that Up and Out Platform Hire supplied a machine to him that was not safe to use.

This judgement now paves the way for a settlement to be negotiated.

Mr Baxter, who has qualifications in the use of cherry pickers and has been working with them since he was 16, said: “It’s a massive relief to finally know that this accident was caused by the machine and not by my error or an error of my employees.

“When the machine was installed I believed that I was been given the right equipment for the job and that machine would be safe for me and my employees to use – especially because the company came to help set it up.

“I now understand the machine is no longer in production and the new machines of the market have a significantly different design to make them safer.”

The Health and Safety Executive investigated the incident but engineering experts believed that the HSE report, which claimed operator error, hadn’t tested all the relevant systems. The machine had been destroyed before further investigations could take place.

Angela Batchelor and Sofie Toft, serious injury lawyers at Irwin Mitchell representing Mr Baxter, said in a joint statement: “This is a big boost for Chris as today’s judgment now paves the way for us to negotiate a fair settlement on his behalf.

“It has been a tough four years for Chris but he was always determined to see the machines investigated properly and he feels that he now has a sense of justice over what happened.”