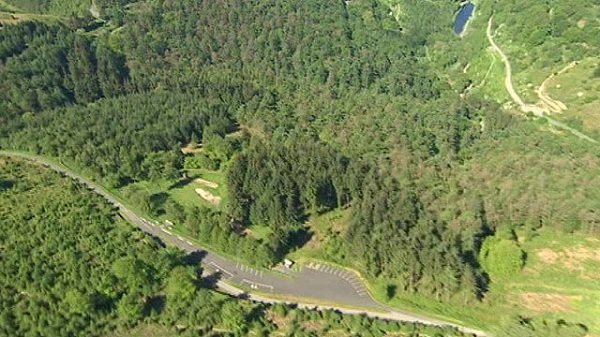 Natural Resources Wales began its tree felling operation in November of last year to slow the spread of phytophthora ramorum, a highly infectious and untreatable fungus-like disease which is attacking larch trees.

Despite the extensive work, the visitor centre and all other facilities are open, including a mountain bike trail which has been diverted. However, the seven-mile long Forest Drive has been closed since the works were announced.

Andy Schofield, operational resourcecs manager for Natural Resources Wales, said: “The work to fell the trees will take two years. Because of harvesting and the scale of the operation and the machinery being used we have had to close the Forest Drive but the rest of the site is open to visitors.”

Staff have been asking the local community what they would like to see in the forest once work has finished and discussing how best they can work together to integrate local ideas into future plans.

A workshop was held last month for people to help shape the future of the forest and was attended by around 40 people.

Yesterday, a dozen or so people visited the centre during a drop-in session to give their ideas for future use of the land.

Among the suggestions were to introduce activities such as a zip wire, artificial ski slope, a Go Ape! Adventure centre as well as reinstating the picnic and barbeque areas.

Mr Schofield said: “The idea behind the work shop and drop-in session is to generate ideas about what people would like to see here.”

“We have had about 100 ideas so far with many people saying they want the Forest Drive to re-open and to keep it as a peaceful and recreational area with family-orientated activities, as well as having more walking trails,” he added.

As a result of the workshop a project group has been formed in order to take some of the ideas forward.