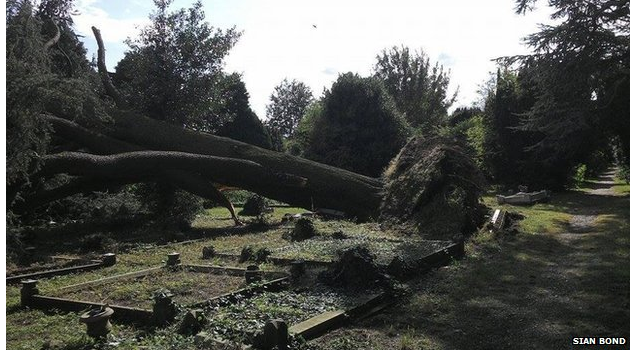 Heavy flooding is being blamed for loosening earth around trees causing them to topple over and crush gravestones in Cambridgeshire.

Two trees came down in Station Road Cemetery in March, on Tuesday evening. Fenland District Council said the trees showed no signs of disease and rain on Friday was the “most likely cause”.

A spokesman said it would take several days to clear the trees before they would be able to assess the damage caused to a number of headstones. A third tree in the cemetery is being removed “as a precaution”, he added.

Sian Bond, who lives close to the cemetery in the grounds of St John’s Church, said she heard “a crash like thunder” as the trees fell on Tuesday at about 18:00 BST.

March was badly hit by flooding on Friday afternoon when 2in (50mm) of rain fell across the county in an hour.

Residents were still clearing up the damage and dealing with sewage on Monday after drains backed up.

Cambridgeshire Fire and Rescue Service said an estimated 11.5 million litres (2.5 million gallons) of water was pumped from properties in the March area over the weekend.