Major sponsorship announced by Stihl at the national arboretum 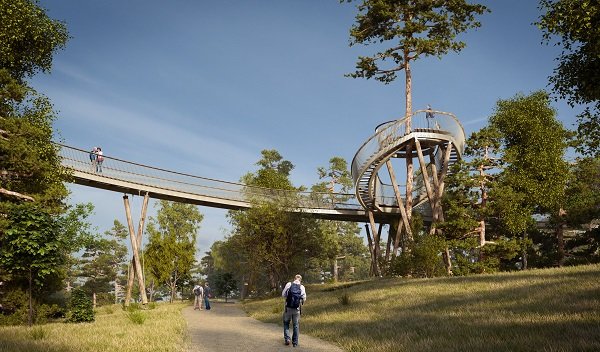 Westonbirt – The National Arboretum and STIHL GB are proud to announce a major five-year agreement which sees the outdoor power tool brand sponsoring a stunning Treetop Walkway.  A key element of the National Arboretum’s ambitious growth plans, the STIHL Treetop Walkway will add an exciting new dimension to visitors’ experience of trees.  Launch of the partnership was marked with a tree planting ceremony carried out by two figureheads of the global STIHL Group: Hans Peter Stihl and Dr Nikolas Stihl.

16 March 2015, and marking the start of a major five-year sponsorship agreement, Hans Peter Stihl from the global STIHL Group, planted a tree at the site of the National Arboretum’s latest exciting project: the STIHL Treetop Walkway.  Demonstrating the importance of the new partnership, Hans Peter Stihl and his son Dr Nikolas Stihl – respectively Honorary Chairman and Chairman of the STIHL Group’s Advisory and Supervisory Boards, had arrived from the company’s German Headquarters specifically for the event.

Due for completion in late 2015, the STIHL Treetop Walkway will take the vision of Westonbirt’s founder to a new level, with the serpentine route offering a new dimension to visitors’ experience of trees.  Visitors will enjoy soaring views through the tree canopy and a range of fun and interactive interpretation will reveal some of the fascinating science of tree growth and survival.  Reaching as high as 13 metres above ground, the Walkway will also provide an all accessible route into Silk Wood – an ancient, semi-natural woodland and home to a stunning combination of native and exotic trees from towering Cedars, through to the vibrant National Japanese Maple Collection and one of Britain’s oldest trees – a 2,000 year old small-leaved lime.

STIHL GB has been an active supporter of The National Arboretum for the past ten years, as a sponsor of the Westonbirt Tree Team.  Armed with a collection of STIHL outdoor power tools and equipment, the team manages more than 15,000 trees in the arboretum’s   600 acre site.  The strong partnership has seen tree team members involved in the development of several STIHL innovations, testing new products from heavy-duty professional forestry chainsaws and specialist protective clothing, to the quiet and lightweight cordless models visitors would use at home.

Commenting on the latest phase of its sponsorship, STIHL GB Managing Director, Robin Lennie said:  “We have been proud to be associated with the National Arboretum since 2005 and this progression of our partnership heralds an exciting phase for this truly special environment.  STIHL’s heritage is very much rooted in with the world of trees, and we are delighted to be associated with a project that will enable even greater public passion for a most precious resource.”

Speaking at the tree-planting ceremony, Simon Toomer – Director of Westonbirt, The National Arboretum said:  “We are very pleased to see our partnership with STIHL go from strength to strength. STIHL’s sponsorship of the new Treetop Walkway at Westonbirt will allow us to give our visitors an even more fascinating view into the world of trees, their biology, care and maintenance. STIHL and Westonbirt, The National Arboretum are both at the cutting edge in their fields and this partnership is a perfect combination of strengths to bring real public benefit.”

Work on the STIHL Treetop Walkway will commence in late spring and the project is due for completion by the end of 2015.  The Walkway represents the final element of a major five-year development project at the National Arboretum, which has included a new car park and Welcome Building plus the restoration of a historical listed downland landscape completed in 2014. Phase II of the Westonbirt Project includes the STIHL Treetop Walkway and construction of a new Tree Management Centre which is underway.  Supported by donations from hundreds of individuals as well as companies, trusts and foundations, Phase Two funding of £1.9 million has now been fully raised, and development of the STIHL Treetop Walkway will add further to Westonbirt’s ultimate goal: connecting its visitors more closely with trees.

Westonbirt – the National Arboretum is located just west of the traditional Cotswold town of Tetbury in Gloucestershire, and easily accessible from both M4 and M5 motorways. The historic, Victorian picturesque landscape and internationally important tree and shrub collection is managed by the Forestry Commission and supported by the Friends of Westonbirt Arboretum charity.