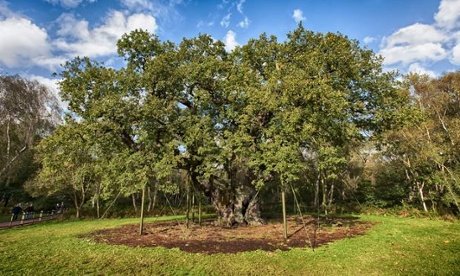 As a hideaway for those who robbed fat cats to feed the poor, it is perhaps no surprise that a 1,000-year-old oak in Sherwood Forest has won the popular vote for England’s tree of the year.

With a girth of ten metres concealing hollow hideaways in its trunk, the mighty Major Oak is reputed to be a bolt-hole of Robin Hood and his gang when fleeing the tyrannical Sheriff of Nottingham.

Almost as many stories cling to this ancient tree as acorns (150,000) and persuaded the public to vote it their favourite in a competition organised by the Woodland Trust.

For Izi Banton, site manager of Sherwood Forest Country Park, where the oak has slowly grown for nearly 1,000 years, the best story is when she approached it fearing the worst following a huge snowfall.

Surrounding trees were almost bent double from the weight of snow on their branches but when she reached the oak, despite its canopy spreading 28 metres, “there wasn’t a flake on it,” she said. “It was so strange. It was like this tree is special, it had been protected. It felt a bit mystical.”

Snow did fall on the tree during the winter of 2010 when a spookily perfect image of Friar Tuck appeared etched in snow on the trunk.

The secret of the oak’s longevity is rather less magical: it had the good fortune to grow up alone, without other trees for competition, in a spacious pasture in Sherwood Forest. It also took things steadily, growing very slowly in poor, very acidic soil.

In recent decades, the biggest threat was that it would be “killed by kindness,” according to Banton. In 1904, metal chains were attached to its branches, which have now been grown around. At one stage the tree was filled with concrete to support it, while limbs were clad with lead and then fibre-glass. Now, apart from some metal props, “we’re letting it go its slow, graceful way,” said Banton.

People travel from Australia to see it and propose by it: the broadcaster Matt Baker revealed he proposed to his wife under its benign gaze.

Unfortunately its many fans are only permitted to give it a hug once a year during an acorn-gathering celebration because the old oak was fenced off after the compaction of the soil above its roots from thousands of feet was threatening to kill it.

Named not after its size but after Major Hayman Rooke, a local historian who described it in 1790, there is considerable debate over its precise age.

Could it really be venerable enough to have been hollow in Robin Hood’s day? “I can’t ruin people’s imaginations, can I?” said Banton. “Of course it cannot but it’s a great legend and perhaps one of the Major Oak’s ancestors provided shelter for Robin.”

The Conservative party chose wisely with its oak tree rebrand in 2006 because the Woodland Trust poll confirmed England’s love affair with the species: seven of the top 10 favourite trees were oaks, with two yews and an apple tree also featuring.

The Major Oak will now lock branches with Scotland and Wales’s winning trees, Lady’s Tree, a Scot’s pine that has been home to Lady the osprey, and the Lonely Tree of Llanfyllin another Scot’s pine which was blown down in a gale in February. All three trees will compete in the European tree of the year contest, which takes place in February next year.

Beccy Speight, chief executive of the Woodland Trust, said the interest in the competition demonstrated the love people feel for ancient trees and called for the creation of a national register to classify, celebrate and protect Britain’s most important and best-loved trees.

She said: “We need to translate this passion into action, to ensure all our venerable old trees have the best possible support and protection to prolong their existence in the face of any threats faced – and that’s exactly what our call for a national register of trees of special interest aims to do.”