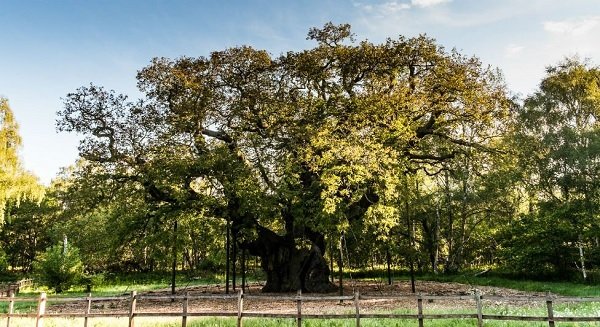 Reputedly used as a hideout by Robin Hood and his merry men, Sherwood Forest’s Major Oak has been picked as England’s “Tree of the Year”. In 2015 it will take on 13 trees from across Europe in what has been dubbed “Eurovision for trees”.

The Major Oak had to see off fierce competition to be chosen as England’s “best”. Both the tree which dropped an apple on Sir Isaac Newton’s head, reputedly inspiring his Theory of Gravity, and the Runnymede yew, where King John signed the Magna Carta, were left in the shade.

Perhaps more than 1,000 years old and weighing an estimated 23 tonnes, the Major Oak has been described as “a stately home” in the forest.

“It is so impressive to look at and it is doing remarkably well,” says Sherwood Forest site manager Izi Banton. “It still has a full canopy, which is amazing for its age.”

Ancient tree specialist Jill Butler, of the Woodland Trust, said it was “as stunning as many of our palaces or man-made wonders like Westminster Abbey.”

Named after historian Major Hayman Rooke, who wrote about it in the 18th Century, its history can be traced back as far as William the Conqueror.

Its supporters are hoping it will emulate an elm from the Bulgarian town of Sliven which received more than 77,000 votes in an online poll to win the title of European Tree of the Year 2014.

The competition, sponsored by the Environmental Partnership Association (EPA), a group backed by the European Commission, will announce the winner of the 2015 online vote in March.

One of the Major Oak’s competitors was nearly destroyed in last winter’s storms. Standing on a hill above Llanfyllin, Powys, the Scots pine known as the Lonely Tree had dominated the skyline for more than 200 years.

People would visit it to carve their initials, propose marriage or scatter ashes. However, in February, the tree was blown down in gales but the community came together to tip 30 tonnes of soil over the roots and there are hopes it will continue to live and grow from a reclining position.

“When it fell I was shocked at how strongly the community felt about that tree – they rallied around it, it obviously means a lot to them,” says tree campaigner Rob McBride, who is promoting for the Welsh entry.

Mr McBride is hoping to visit all the entrants before voting starts in February. “It’s like a Eurovision for trees – but without the bad music,” he says.

Organisers in the Czech Republic say the winner will not necessarily be the oldest, rarest, biggest or even the most beautiful specimen.

Contest co-ordinator Andrea Krůpová said: “We are searching for the most lovable tree, a tree with a story that can bring the community together.

“Trees are in the very heart of the European cultural landscape although they do not always have an easy life there. They deserve our attention and care.”

Scotland’s entry, above, is another iconic Scots pine in a nature reserve in Perthshire.

For the past 24 years an osprey affectionately known as “Lady” has been returning to a nest in its branches.

Over this time, the osprey has laid 71 eggs and fledged 50 chicks, while a webcam attracts more than one million viewers a year from more than 160 different countries.

This black pollarded poplar in Spain is one of more than 4,700 in Aguilar del Alfambra, which houses possibly the largest concentration of the species in Europe.

In 2009, the first Black Pollard Poplar Festival was celebrated in the nearby village of Ejulve and this specimen was selected as a representative.

Spain, England, Belgium and Estonia are new entrants to the 2015 competition, which has been running for five years.

The Irish entry – a Cedar of Lebanon tree was planted by farmer Matt Fogarty, of Ballinderry, County Tipperary, on his 50-acre woodland in memory of his wife Mary.

“She was great support over our 45 years together and she is a great loss in my life,” he says.

On the right is a 200-year-old white mulberry in Senica, Slovakia.

It is one of the area’s “most beautiful and oldest trees looking patiently at a world, which is constantly changing”, according to Ekopolis, an arm of the Slovakian Environment Agency, which organised the country’s vote.

An imposing chestnut tree known as the “bread tree” has stood guard over its surroundings in Pianello, Corsica, for 1,000 years.

The French magazine Terre Sauvage described the 15m circumference tree as “a fantastic being, half plant, half human, protector and guardian of the place”.

In Opatavice, Czech Republic, a pine tree believed to resemble a five-headed dragon, has been popular with generations of children who climb its branches.

St George, who is patron of the local church, is said to have fought the dragon, now cursed to forever remain a tree.

The Slav Oak in Debina, Lower Silesia, left, is a symbol of Polish identity.

Klub Gaja, a Polish environmental organisation, said the 450-year-old tree dated back to the Silesian Piast Dynasty and was a symbol of resistance during the Silesian Wars of the 18th Century.

The Estonian entry is an oak situated in the middle of a football pitch. For players in Orissaare, it acts as an obstacle but sometimes an aid as they deflect passes off its trunk.

“Before 1951 there was a small sporting area beside the oak tree and when it was expanded the tree ended up in the middle of the stadium,” Mr McBride says.

A plane tree, which stands in the grounds of a school in Archar is the Bulgarian entry.

In Hungary, on the banks of the Old Lake of Tata, a sycamore tree has been here for more than 230 years.

Along with several others, the tree was brought from the Palace of Versailles by a member of the Esterházy family.