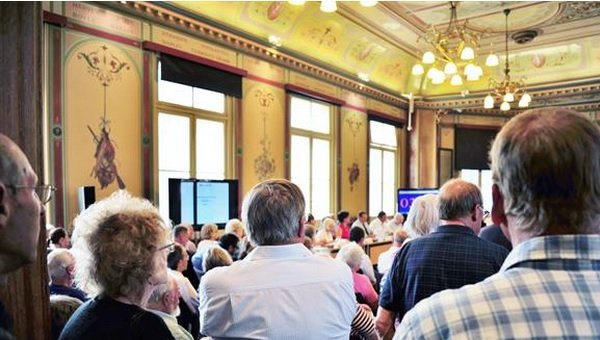 Controversial plans to build 220 homes in Boughton Lane, Maidstone, have been rejected after an impassioned debate in the Town Hall.

The public gallery was packed with opponents of the application submitted jointly by Kent County Council and the Future Schools Trust, which runs the New Line Learning Academy.

The scheme proposed selling the school playing fields for 220 homes in a deal that would have seen new playing fields created on adjacent agricultural land, as well as a large area of land gifted to the Boughton Amenities Trust.

Funds would have been provided that would have supported the extension of both the Five Acre Wood Special School and the Tiger Primary School.

But Cllr Derek Mortimer (Lib Dem) presented a petition signed by 1,500 nearby residents against the proposals, which he described as a “monstrosity”, and Sean Carter, representing the North Loose Residents Association, warned that the scheme would add 53% extra traffic to the already congested junction with the Loose Road.

The motion for refusal was introduced by Cllr Ian Chittenden (Lib Dem) who pointed out that although Kent Highways was not objecting to the extra traffic, KCC had not tested the traffic figures submitted by the applicants.

Cllr Tony Harwood (Lib Dem) seconded the motion to refuse after speaking about the damage that would be caused to Five Acre Wood, a designated ancient woodland, through which developers intended to drive one of the access roads.

He said it would be inconsistent to allow the loss of ancient woodland here, when the council had three weeks earlier rejected an application at Hermitage Lane on the same grounds.

Cllr Stephen Paine (Con) spoke in favour of granting permission, saying: “We have an opportunity to significantly invest in our educational infrastructure.” Cllr Malcolm Greer (Con) agreed, saying: “The benefits outweigh the concerns.”

Because Kent Highways had raised no objections, committee chairman Cllr Clive English (Lib Dem) advised they could not give traffic generation as a reason for refusal.

Cllr Harwood was also dissuaded from giving the creation of the new school playing fields, which he regarded would be an intrusion into the countryside, as a reason for refusal, with officers saying they could not support that at any subsequent appeal hearing.

However, with Cllr Richard Ash (Con) and Cllr Christine Edwards-Daem (UKIP) also voting for refusal, the application was rejected by 8 votes to 5 on the grounds that it would cause harm to the ancient woodland and did not meet the borough’s adopted policy of requiring 40% affordable housing – the scheme offered only 30%.

The local county councillor Brian Clark (Lib Dem) said after the meeting: “It was the right decision. Many questions remained unanswered over how local roads and junctions would cope with the extra traffic. Congestion, poor air quality and pedestrian safety are major concerns in this part of south Maidstone.”

But Cllr Mortimer warned: “It is inevitable that the developer will appeal against this democratic decision, and they will have powerful supporters. Local people and their representatives must remain vigilant and ready to fight tenaciously at any forthcoming appeal.”