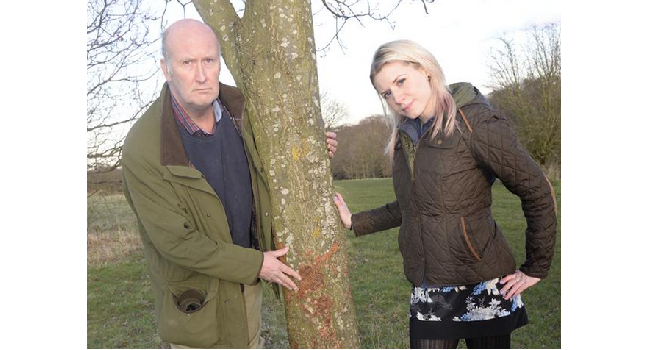 Trees are being attacked on a Whitstable village green – and it is believed a bark-ing mad dog is the culprit.

About 20 to 30 trees have been targeted on Duncan Down and environment bosses reckon an alsatian dog is behind the damage.

Cllr Ashley Clark, who is secretary of the Friends of Duncan Down, says it is “heartbreaking” and is appealing to anyone who may know the dog’s owner to come forward.

He said: “It sounds funny, a dog that’s psychopathic, but in reality it’s not.

“We put quite nice trees in and they were developing well but the dog has gone all the way around it.

“We want people to enjoy the place, not wreck it. It’s just heartbreaking when you think of the effort that goes into it.

“We spend hundreds of hours every year to keep it tidy and look after it.”

Cllr Clark says that when the damage was first spotted nobody was sure what was behind it.

Various oak and 100-year-old monterey cypress trees have had their bark ripped off.

He added: “We didn’t know what was doing it to start with but someone has seen the dog doing it –that’s the information we have.

“We work very closely with the environment officer and she is shocked. We think it’s an Alsatian.

We are not best pleased with it – we don’t want disease getting in and the trees killed.

“We would like to know who this person is so, if need be, we can tell them to not bring their dog here, muzzle it, or the council will get an injunction.

“If anybody knows who this person is, they can pass the details onto me or ring the council’s environmental officer on 01227 862187.”