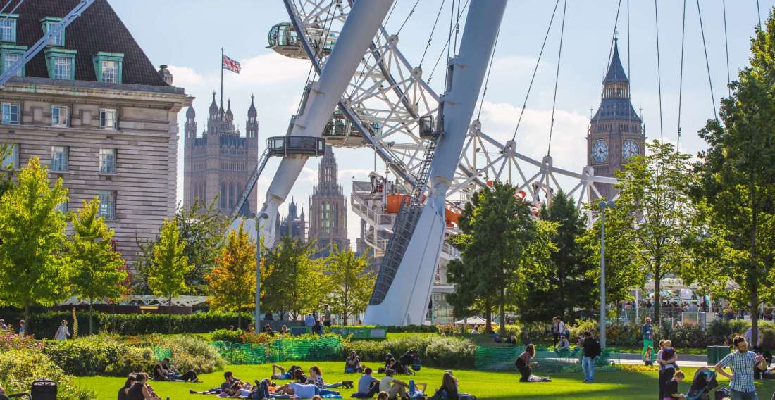 Being around trees does a great deal of good for fighting climate change by mitigating air pollution and absorbing carbon dioxide from the atmosphere. These benefits aren’t just felt in rural areas, either. A new study by researchers at University College London found that the trees in the London borough of Camden store as much carbon per hectare as rainforests, Fast Company reports.

A slew of health benefits are associated with being around trees. They have been known to reduce people’s stress and improve overall mental health, and according to one 2015 study, a walk in the woods can make people feel seven years younger.

A tree’s ability to soak up carbon dioxide during photosynthesis is especially useful when the tree is in an urban area, where industrial activity—and the burning of fossil fuels—tends to be more prevalent. For the study, published in the journal Carbon Balance and Management, the researchers used laser scanning methods to take their own carbon readings of trees from the ground as well as the air, and then compared their findings with publicly available Lidar (light detection and ranging) data from the UK Environment Agency. They were then able to estimate the biomass of 85,000 trees in Camden, where the university is based.

They determined that Camden had a median carbon density of around 55 tons of carbon per hectare (t/ha). Greener areas of the borough, like Highgate Cemetery, had a carbon density of 380 t/ha—levels that are typically seen in tropical rainforests. For comparison, major cities in the U.S. have carbon densities of 7.7, and in China the figure is 21.3.

So what exactly does this mean? Trees could theoretically help offset climate change and global warming by removing carbon dioxide (a greenhouse gas) from the air and storing it as biomass, thereby cooling the atmosphere. However, some climate scientists argue that it’s more complicated than that, and any impact felt by tree-planting initiatives today may not be seen for decades. Still, with all of the other benefits trees offer, planting a seed or two couldn’t hurt.