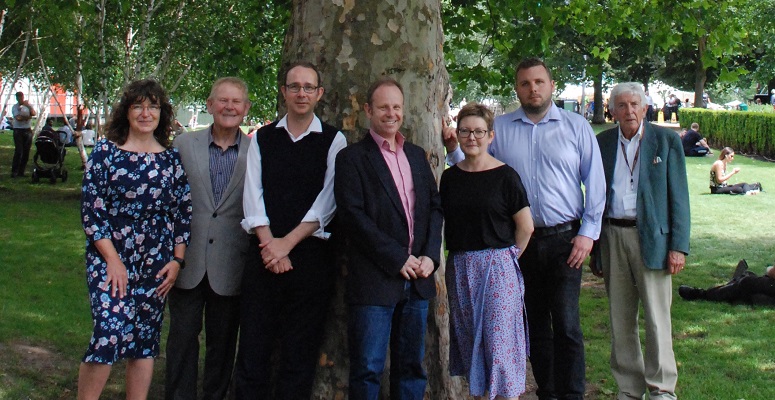 On Wednesday 10 July approximately 80 delegates attended the London Plane Tree Conference at City Hall, organised by The Conservation Foundation. London Planes are a vital part of London’s landscape and the conference aimed to start a discussion on how to preserve them.

The event was chaired by Matt Brown, editor at The Londonist, whilist Professor Chris Baines, Paul Wood, Greg Packman, Dr Ana Perez-Sierra and Barbara Milne were all speakers at the conference.

Professor Chris Baines began the conference by giving a general introduction to London Planes. He spoke of how they were planted so widely due to their capacity to cope with air pollution. However, he continued that over the last 100-150 years the city has changed, and pollution has changed from factory pollution to car pollution and the trees are struggling to cope. He also suggested that the way in which groundwater in London is managed needs to be addressed as he believes the roots often gravitate towards leaking pipes in times of drought. Chris then posed the question; can the wasted water be used to irrigate the trees which in turn would take pressure off the water mains and stop the roots destroying the pipes?

Paul Wood discussed the history of the London Plane tree in greater detail, noting that it was first planted as early as 1680 but only named the London Plane in the late 19th century when it was planted along the Thames Embankment. Greg Packmen continued the conference by looking at the practical management of London Planes, looking primarily at the benefits of pollarding when done correctly. Greg also spoke of the threats facing the trees ranging from budget cuts and development pressures to poor pruning and pests and diseases.

The diseases that threaten the London Plane tree were discussed in greater detail by Dr Ana Perez-Sierra, who commented that since 1900 the pests and disease threating the trees have been rapidly increasing. Focusing on two diseases which are not yet in the UK, Canker Stain of Plane and Xylella Fastidiosa, Dr Ana spoke of the devastating effects they would have if they reached the UK. Commenting how it is vital that the industry is better educated on how the pathogens move around and how they can spread. Suggesting that it is important to clean any kit that you have used when working abroad before coming back to work in the UK.

Finishing of the speakers, Barbara Milne of the London Tree Officers Association spoke about their mission to promote, support and enhance urban forests. The London Tree Officers Association currently have 150 tree officers across London with 45 associate members who carry out annual plane tree surveillance. Barbara stated that as an industry we need to “be proactive not reactive and work collaboratively”.

Once the speakers had shared their knowledge and thoughts on London Plane trees the discussion opened to the floor where many interesting discussions where started. The issue of conserving architecture over planting new trees, such as in Regent Street was raised, where it was then contested that it is a case of trying to plant the right tree in the right place and finding enough space both above and below ground. The question of how to look after newly planted trees was also raised, as it was discussed that with the Olympic Park there was a rush to plant lots of trees to make the area look great but then hardly any aftercare was implemented. It was then agreed by the majority that in order to save the London Plane tree additional money for aftercare schemes needs to be implemented as well as more schemes which plan where tree roots can grow. The debate came to a close after a discussion about the Victoria Park Holocaust Memorial, where delegates commented on how it was another example where preserving trees and green spaces was overlooked.