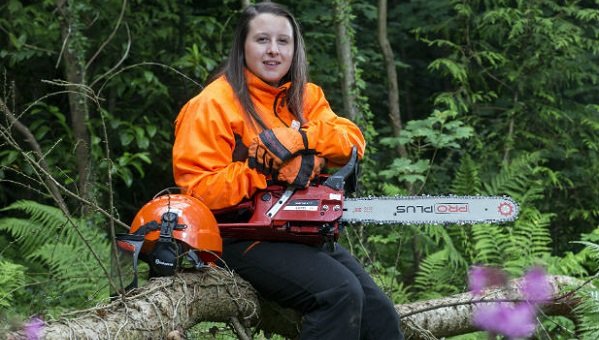 For most teenage girls, driving a forklift and spending your days felling trees with a chainsaw is not the conventional route after school or college.

But for Shannon Lloyd, that has not been the case, as her days consist of getting stuck into the great outdoors rather than being stuck behind a screen all day.

After leaving college, the 18-year-old, of Coedcae, found a job as a forestry assistant through the Welsh Government’s Jobs Growth Wales programme.

“After my A-levels, all my friends were going to university but I didn’t want to go down that path,” she told the Star.

“I knew I wanted to work in the outdoors. I spent most of my childhood living in Morocco, Turkey and Sri Lanka and I would spend a lot of time at the beach.

“When we came home to Wales I would play in Stradey Woods near my house, and I play football every week and teach under 14s, so I wanted to do something practical and hands-on.

“I’d had a part-time job in an office and knew I didn’t want to sit behind a screen all day.”

Shannon began working for forklift training provider DW Professional Training in Llanelli at Stradey Woods, and within just months had become a registered and accredited RTITB forklift and .

She now has a City and Guilds NPTC level three certificate in tree felling, which means she can fell any sized tree in the country, after completing the course in a record seven months.

Her next step is to gain a Lantra accreditation to become an accredited instructor and assessor in chainsaw and brush cutters.

Shannon, who is now based at the company’s site at Delta Lakes added: “The first time I got on a forklift truck, it was daunting, the biggest one I work on is 14ft high, but I learned quickly and now I’m teaching others to do it.

“On an average day, I can either be forklift training or felling trees up to 80ft high.

“Using a chainsaw is physically demanding and you need a lot of upper body strength to fell a tree, then cut up the logs and stack them.”

She is now training up a new female recruit, Alisha Williams, 18, also from Coedcae, who is on a work placement at the company and is expected to take on a full-time role.

Shannon added: “If you can do the job, it doesn’t matter if you’re male or female and I’ve always been determined to be the best at what I do.

” I love it and I’d love for more women to find out about this sort of role and have the confidence to pursue it.

“Society still has a certain expectation of women, and society still doesn’t expect women to be doing heavy jobs, so while things are getting better, there’s still work to be done.”