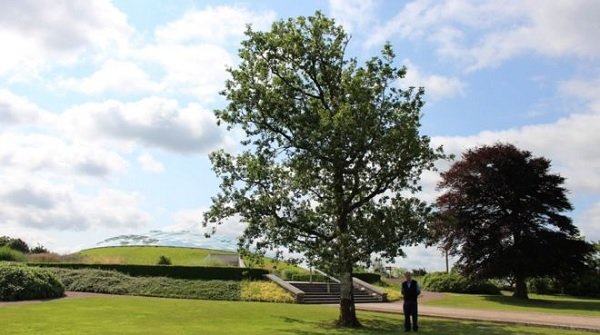 An oak tree that was nearly destroyed has won the Wales Tree of the Year award 2015.

The tree at the National Botanic Garden of Wales, in Llanarthne, Carmarthenshire, had been given the title Survival at the Cutting Edge.

Terry Treharne, who entered the tree in the competition, said he had almost cut the oak down when he was a teenager.

The award means it will be Wales’ entry in the European Tree of the Year contest in February 2016.

Mr Treharne said on his entry form: “When I was born, what is now the National Botanic Garden of Wales was seven starter farms.

“To earn pocket money at the age of 14, I was given the job of clearing an overgrown paddock.

“Armed with a scythe, I cleared vast tracts of it, until I developed an excruciating pain in my elbow and had to stop.

“On my return two days later, the farmer reminded me (though they hadn’t told me before) not to cut down the oak tree in the paddock.

“So, but for my elbow, I would have destroyed this beautiful tree.”

David Hardy, from the botanic garden, said: “Clearly, there was something in this story of its chance survival all those years ago that struck a chord with public.”

The oak received 28% of the votes to win the award – organised by the Woodland Trust and supported by players of People’s Postcode Lottery – ahead of six other trees.

It will join the Cubbington Pear Tree in England, the Suffragette Oak from Scotland, and Peace Tree in Northern Ireland in the European contest.

Woodland Trust’s chief executive, Beccy Speight, said: “These four trees all demonstrate the intrinsic way our lives are linked to the natural world.

“Sadly many iconic trees do not have the levels of protection they deserve and this contest highlights the need to ensure they remain for future generations to enjoy and memories to endure.”