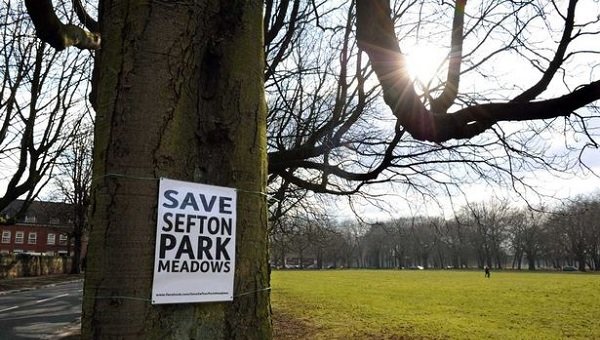 He says he is “unhappy” about the loss of the trees, which would be felled to make way for executive homes, and has asked the developers to reconsider their planning application.

Plans show a quarter of trees (27 out of 110) around Sefton Park’s Meadowlands will be culled for the new housing project.

Mayor Anderson said: “I am today voicing my concerns about the latest proposal from Redrow for land at Park Avenue.

“Like residents, I was unhappy with the number of trees that would be lost and have asked them to amend the scheme to make sure that there is no tree loss if at all possible.

“There has been a lot of discussion with the developer over the last few months about meeting this aspiration, and the planning application we received most recently is the third design that Redrow have come up with the two previous schemes being too dense in my opinion.”

A tree report contained within Redrow’s planning application to Liverpool council for the site recommends 27 trees including Horse Chestnut, Lime and Ash be removed for the development, six of which are described as high value meaning they particularly good examples of the species.

Under the current proposals the trees would be removed to create access points into the new development.

Mayor Anderson said: “Redrow… have been very receptive to the concerns raised and are continuing to work very closely with the council in making sure the scheme is right for which I am very grateful.

“I know there is a great deal of passionate debate about this site, but I have been absolutely clear from the moment that we declared it as available for development that any residential scheme needed to be of the highest quality, of low density and in keeping with the area.

“We could have received more than double the amount we will finally receive if we were not so determined to make sure that the development is of a density, design and quality that is appropriate for the surroundings.”

Campaigners have been fighting to stop the development of the land, saying it is a much-loved green space.

Mayor Anderson said: “It is worth reminding ourselves of the rationale for the development. Quite simply, it is to help offset the eye-watering government cuts we have faced, and will continue to face, over the next few years.

“The sale price of the land will provide a much-needed financial boost, and be invested in projects such as parks. The project will also help us meet the demand for much needed high-quality homes in the city, generating tens of thousands of pounds of high band council tax income to help support services.”

He added: “I love Sefton Park. I have used it for the whole of my life and take my grandchildren to use it regularly. So I would absolutely not approve any scheme that causes harm to the park itself.

“The bottom line is that the investment we are getting from the development at Park Avenue will help us, in difficult times, to continue to protect it.”