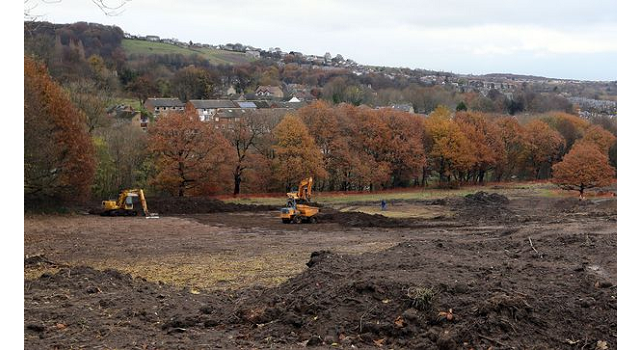 Campaigners are pressing for pathways running through a beauty spot destined for housing to be recognised as official public rights of way.

Members of Clayton Fields Action Group will take their case for registering the footpaths through the site off Edgerton Road in Edgerton to a meeting of Kirklees Council’s Huddersfield area planning sub-committee.

The group has already succeeded in getting developer Seddon Homes Ltd to open a gate across one of the “claimed routes” to allow pedestrian access – following lobbying by Huddersfield MP Barry Sheerman, ward councillors and Chris Sutcliffe, deputy headteacher at St Patrick’s School at Birkby.

Now the action group is urging councillors to back the registration of an existing woodland walk through the site, which the developer says has to be stopped for construction work to start.

The developer has proposed new footpaths which it says will improve local pedestrian links between Edgerton and Birkby both for residents of the new development and existing local people.

But action group member Jonathan Adamson said the proposed footpaths were mainly on pavements, adding: “We are trying our best to have some form of walkway and biodiversity for the local community and the animals.

“It is very important that a woodland walk is established and recognised by the council.”

Campaigners have lodged an application with the Right of Way Inspectorate for one claimed right of way, which records show goes back to 1949.

The inspectorate has now written to Kirklees asking for its response to the application.

Campaigners lost their 18-year battle to prevent planning permission for more than 40 houses to be built on the eight-acre site after the registration of Clayton Fields as a village green was declared invalid by the Supreme Court in 2014.

Marketing of the site began in December last year through estate agents Simon Blyth with buyers asked to bid for one of the 41 sites.